The third (sort of) yearly release for the local barleys – of 5.  The first one was released in February 2016, the second in February 2017, both of the previous years were characterful and excellent whiskies, I believe the first one will be the oldest of the whole set. 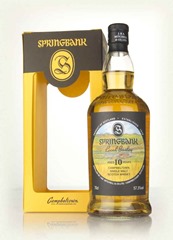 Nose - Coffee and a little butyric at first glance, then lots of wax, royal icing and pine needles (ahem). Underneath, waxy cask, quite hard but with red fruits and buttercream. Dominantly creamy and waxy, none of the brimstone of young Springbank and a rather beguiling chalkiness. The coffee becomes danker, slightly oily with water.

Body - Sweet, but balanced with absolutely classic Springbank oils, a touch of marzipan, gunpowder and Shreddies. Fruitier and dustier with water, much more of the character of the 18 year old, and a really delicious development, very sippable.

Finish - Medium to short, peppery at first with liquorice imps, green apple and that butyric note back at the end. Softer but more cereal and pepper with water, wet oak and a touch of chilli pepper at the end.

I'm very pleased with this year's LB, it's got class and maturity, but really spiky and interesting to match its age, and very in character for a flagship official Springbank release. Hope you got yours!