2017-1842=175, and therefore this year is the one hundred and seventy fifth anniversary of Cadenhead’s, much loved bottler of whisky, rum and other stuff… and today, August 1st, is the actual birthday!  Imagine having 175 years of history in anything, and then imagine applying that to the kind of world that Scotch whisky inhabits – slow accretion of stock, gentleman’s agreements and trading arrangements that stretch back through decades, and the kind of long term thinking that allows you to dish out multiple casks that you’ve looked after for over 30 years monthly for a whole anniversary year.  Imagine being Mark Watt, whose job it is to sell something that everybody really, really wants to buy.  Lucky bastards.

This year has had an outturn every month, which have been duly documented here and have delivered some truly epic whiskies.  I knew about plans to make a big release for August for a while – a cask selected for each shop - and ended up being part of the tasting session for the London cask.  We shortlisted 10 samples from 17 (I could have easily written notes for all 17 in one hit of course), then made brief notes for those 10, then got down to 5 and voted for 1.  The whole thing was tasted blind (distillery, age, cask) although I confidently made a lot of incorrect predictions.  The cask we picked in the end wasn’t my top choice (suspect I picked something a bit weirder) but it was at least my second or third choice.

Each of the shops also went through a selection exercise and none of the shops picked the same cask from the 17.  One of the casks that was in a lot of the top 5s but didn’t make it as any shop’s top choice, appeared in last month’s outturn (although I didn’t know that when I made my notes) - the Glentauchers 27 year old.  This shows you the kind of level we were working with.  Here’s the final list of selected casks:

I still have my blind notes from the session, so once I find out what the mapping is between the casks and my notes, I’ll be able to publish them (plus my incorrect predictions!).  Also I think I’m in on a split of the whole set, so I will make proper notes for the whole lot once I have them.

In the meantime, I visited the London shop to try the Glenburgie for the release event with Mark Watt.  We had a few interesting other drams – a 23 year old Ardbeg bottled in 2000, a customer had brought along his own blend of a couple of ancient Springbanks which was superb, and a bottle which was the dregs of all the cask samples plus a very old grain (also surprisingly excellent).  Plus I was able to try a sample of this old Arran originally for the Taiwanese market…

Single cask. This was originally intended for Taiwan and took a last minute swerve back to the UK. The friend of a 28 year old sherry Mortlach at 54.5% which I haven't tried, yet (but will as I'm in on a bottle split of one). 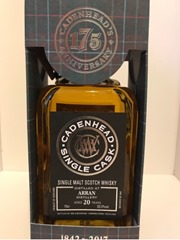 Nose - Quite dark and meaty at first. The expected fruit and toffee is here too, and an interesting splash of sulphur, but then it's Arran all the way, with birthday candles, cut parsley stalks, and pancakes with apple sauce. What really works here though, is the soft Arran fruit with the perfectly judged sulphur, absolutely superb. Even better with water - more vanilla, more cream, more fruit.

Body - Gentle but a little spiky, typical mature Arran again - lots of structure, lots of fruit and a generally soft arrival. Herbal behind the soft toffee, and really creamy. Fruitier with water, quite tropical with good tannins.

Finish - Long and quite bitter to balance the soft fruits and general mouthfeel.

It's been a while since I've had an Arran at this ripe (and practically terminal) age, and I am a huge fan of mature Arran. Also, I can't recall a non-excellent Cadenhead's Arran, and they seem to have quite a few from the formative days of the distillery (and seem to be quite close knit with them). This doesn't disappoint. 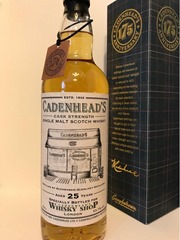 Nose - Ripe, fresh, a robust but mature cask with lots of grapefruit, deodorant, greengage and boiled sweets. This clearly stood out in the tasting as a really classical whisky, and now I know what it is, it comes across as a superb, warm and gentle cask.

Body - Rich, dusty and so much wax, orange oils and linseed. Slightly fizzing.

A really grown up, waxy, complicated but fresh and easy drinking whisky. For it to stand out against that set it would have to have been something really special and so I'm confident this would work well as the climax of any tasting.

It’s only August, more is coming.