Late, late, late again and no excuse this time except work and family.  Also, quite a hard outturn, with lots of challenged drams in it and then oddly, some fabulous Islay stuff.  Weirdly, most of this is still available though, as late as I am, so not too much harm done (although I’m sad to have missed the Bowmore).

Quickly now, buy the Laphroaig and then come back for the rest. 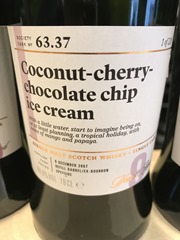 Nose - Proper honest gear here, a good opener (on the nose at least). Highly mineral with a warm white wine backing, this is waxy (I would have gone with cherry lip salve) but I get the cheap Neapolitan ice cream thing here too, plus that kind of pliable and backed-by-buttercream icing you get on a shop bought birthday cake. Even better with water, fruit and wax more integrated and the ozone on exhale. Cracking.

Body - Quite sharp - zesty but sharp like a chewed lemon wedge with a pip in. Hot chocolate and dried apricots. Creamier with water.

Finish - Medium but quite bitter and a little blooded, there is a slightly dirty note in here I would describe as preserved lemons if I was being charitable, probably old charred lemons if not. Sweeter with water. Aspirin at the end.

This would be a good glugger if the end of the development wasn't quite so bitter. I do love the nose though, good and honest. 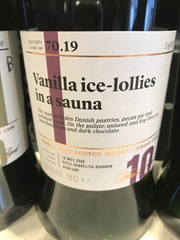 Nose - Fresh and cold, lightly floral with lolly sticks, wet rocks and white vanilla cream (particularly on exhale). I tried really hard not to just come back to vanilla ice-lollies but that's what it smells like! It's a little clumsy though, to be honest - simplistic vanilla and putty. Better; cut plums and icing, with water.

Finish - Long, peppery and drying, with flashes of green apple. Interesting herbal notes at the very back.

Quite an ordinary whisky, and my hopes weren't that high. 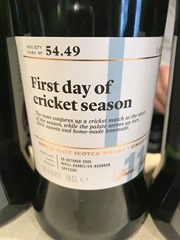 Nose - Less honest perhaps than the 63, but proper old school, this has far more intensity. Red apple flesh, fountain pen ink, Danish pastries and granite. With time, the fruit is softer (peach and orange). Even classier with water.

Body - Soft waxes, with chalk and more granite, this has grapefruit bitterness and numbs the lips. There's a fence-panel hollow woodiness in this but it's compelling despite that.

Young, interesting and drammable, with another fantastic nose, this would be a good one for the bar. 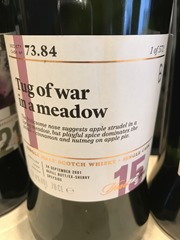 Nose - Slightly charred, dusty chocolate, maybe Mexican chocolate before being grated into hot water (it has that bright spicing - cinnamon and fennel). There's also a oversweetened sourness here that smacks of a virgin oak experiment. Behind these two rather obvious notes (and especially after sipping) there's something more interesting; pear, candle wax, peach perhaps.

Finish - Spicy and numbing, cherry lipsalve and garibaldi biscuits. Quite long and rich in the end.

An enormously confusing whisky, but (as they often are) quite interesting and returnable-to in the delivery, I particularly like the awkward fruit and robust woods. Ultimately though, undetectably sherried, much more VO and so I wonder if this has been subject to more experimental cask abuse. 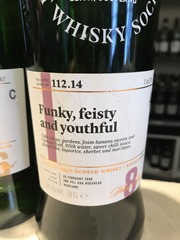 Nose - It is indeed rather obviously funky on the nose, cakey and peachy with lychees and buttercream. There's that underlying silly putty tone in the funk which reminds me of Auchentoshan. Quite exciting.

Body - Extremely spicy this, like rolling tobacco tar, almost like the lit end on the tip of your tongue. The funky fruit plays out behind this raw, chilli heat. Much better with water, we're down to the level of chilli chocolates or chilli sweets, but now it's too bitter.

Ouch. I enjoyed the nose but this delivery is way too hot.

11th October 2000, 142 bottles, After 15 years in ex-bourbon wood we transferred this to a first-fill Spanish oak Oloroso hogshead 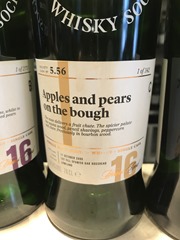 Nose - OK, actually Auchentoshan. There's more dried mango in the nose than the fake ones before, with peach and marzipan tart and a really delicate, fruity sweetness. With time, very distinct dried fruit and mixed spice. With water, oversmoked pork. Delicious.

Body - Arrestingly different, recognisably Auchentoshan but an unexpected fizzing gunpowder and medicinal note grabs you from the start. Disappointing with water.

Finish - Down through cigarette and coffee and into licked perfume and Germolene. Hot again but I suspect my palate is a little hurt from the Inchmurrin. Bitter at the end.

A truly bizarre whisky, with a finish that is slightly beyond my love of the Auchentoshan character. I command you to try it at the bar, and challenge you to make it through a bottle at home.  I’d try a dram at the bar again.

1st June 2000, 261 bottles. After spending 16 years in an ex-bourbon barrel it was transferred to a 1st fill charred ex-red wine hogshead. 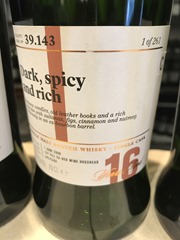 Nose - Liquorice allsorts, red wine in last night's glass (probably auto-suggested by the cask sentence I've just written), wine gums and something green, like strawberry stalks and leaves. This is rich though, vanilla sponge and wine gums with digging, and marker pens and classier fruits with water.

Body - These charred wine hogsheads are all quite similar in the delivery, the hard, sour, numbing tannins of VO tempered by rich, soft red fruits. Much better with water, more cake at the front, classier by far.

Finish - Flashes of wine, crushed by bitter wood and aspirin. Once the whisky leaves your tongue the soft fruit is obliterated. At the end, gummy sweets and some Linkwood behind this but I would have preferred to taste the original refill bourbon.

Another great nose, dodgy casking, but this one comes through pretty well. Worth a shot at the bar but a tiring finish means I'd struggle with a bottle. 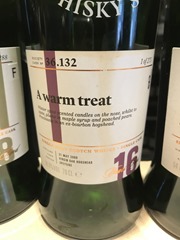 Finish - Roasted and burnt, like espresso coffee and black malt. Tarry smoke, like coughing on a cigarette.

One of the stranger VO cask I've tasted, maybe this was charred a bit more heavily than normal. A very challenging dram neat, I think water brings out the underlying whisky. Worth a punt at the bar. 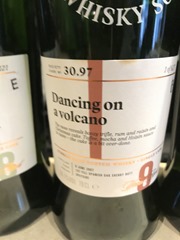 Nose - Rich, ripe and slightly sour, with great sherry depth (almost liquorice) and a touch of petrol. A lot more cask complexity with water, with hoisin sauce and linseed oil.

Body - Slightly spicy, with chocolate cake and nutty Oloroso. It has a weirdly dusty, bretty edge, but a really compelling fruit and nut bar sweetness.

Finish - Long and hot. Splints and liquorice imps. Much more typical with water, I'm regretting spending so long with my tiny sample neat.

An interesting, robust heavily sherried (but not overdone) whisky, but almost nothing to do with Glenrothes. 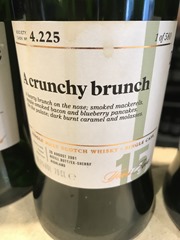 Nose - Zesty, young, full of acrylic paint and wine cask. Peated barley, chewed, with overstewed tea and roasted plum skins. That acrylic paint turns into typical window putty with time. After sipping, the waxes in the nose come through and make more sense.

Body - Burnt toast, charred pepper and garlic, but not sulphured and not a problem. It's citric and peated like a 10 year old bunna though. Richer with more cereal, with water. 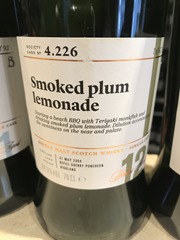 Body - Much richer than the 225, honey again, but the peating is still robust. A delicious, balanced peat/wax/fruit sweets thing mid-development. Sawdust, green apple and Refreshers.

Finish - Long but bitter, liquorice root and strawberry laces. A hint of chocolate and sulphur at the end.

This is a balanced, interesting, drinkable whisky, and well worth a dram. 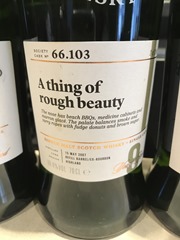 Body - Richly sweet at first (blackcurrant jam) then burning electrical insulation and bandages - funky and just straying into dirty. Slightly classier and a little softer with water, with wort from an IPA and orange squash.

Finish - Sweet fruits and fizzing peat, quite long and very interesting, significantly better than all these finishes. The dirt is back at the end. Long, very drying, very tannic and very compelling.

A breath of fresh (if funky) air in this outturn, the quality is obvious. 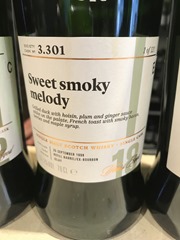 Nose - That is beautiful - elegant peating and a very intense blackcurrant note. Perhaps breakfast pancakes with butter and blackcurrant jam. There's more here though, shellfish (mussels) with white wine, charred peach, smouldering rosemary and Victoria sponge. And a little petrol. And something sweet but smoky, like burning cherry pipe tobacco (but not that).

Body - Hotter, more burnt than I was expecting but delicious for it - one of the more charred cereal Bowmores (we sure this isn't refill sherry?). Even peatier with water.

This is proper. I would have been all over this if I'd've been tasting the outturn ahead of time. 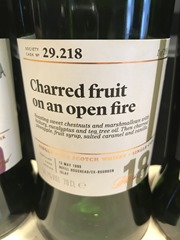 Nose - Really deep and sweet, cut purple plums and pastry, but with a weird petrol station, cardboard and hot radiator thing going on. Now I'm sure this one must be refill sherry, it reminds me of those epic Signatory bottles (maybe it was all in the Laph rather than the sherry!). Quite evocative with water, like discovering indie Laphroaigs.

Body - That cardboard is back but with white bread, toffee, intensely peated cereal and aspirin. There's fruit too, behind some quite serious peat and chilli spicing; fruit toffee, marmalade on toast. Better integration of the peat with water, seriously delicious.

Finish - Long and hot, extra strong mints and burning spice (but in a good Laphroaig way). Fisherman's friends and sugared pastries at the end.

4th April 1995, 228 bottles, after 20 years in ex-bourbon oak we transferred this to a 1st fill American oak PX hogshead, sold out 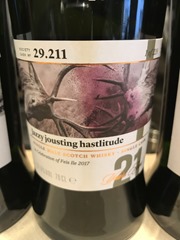 Nose - Gentle sherry stuff after the 218, nevertheless this is also rather special - ripe cut plums, the icing from Mr. Kipling's chocolate cupcakes, a little magic balloon, but with that special something Laphroaig has when it hits sherry - it's a grown up funk… all Haribo wrapped in bandages. The nose alone was worth the price.

Body - Sweet and mellow, gentle fruit and nut bar, restrained sherry and behind this, classy but intense peat. It is mellow though, despite that.

Finish - Long with medicinal, cereal Laphroaig poking out from behind the jam. A great balance of peat, fruit, tannins and pepper.

This is also delicious. The nose is phenomenal and old school, and it's quite pleasant for that to be combined with a quite mellow delivery. Despite the day-making nose, I still prefer the *in stock* 218 though. 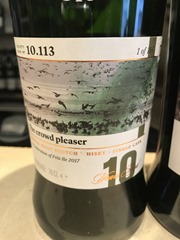 Nose - Classic 10yo peated bunna, this is intensely sweet but balanced by a severe peating - coastal but full of bandages and charred wood, with Germolene and charred rosemary. Warmer with water, and a distinct note of Brettanomyces.

Body - Perfect Islay - dusty and chalky, medicinal and then sweet, this has quite a fetid feel to it; a washed up mermaid's purse, mezcal and red wine. Definitely Refreshers with time.

BUY - but don't go crazy due to the picture, there have been plenty of great society 10s before and there will be plenty after.