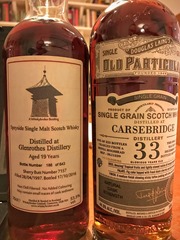 Another pair.  A couple of rarely spotted, well matured, intensely coloured whiskies from two excellent independent bottlers.  I meant to post this before the November outturns but it got lost in the excitement!  I was reminded because there was an online tasting tonight of old Douglas Laing grains, not including the Carsebridge but interesting stuff which I should have been on but couldn’t attend at the last minute.  I’ll write notes for those soon though.

Note these bottles were both fresh open (only a couple of days) and whisky this colour often benefits from air and time. 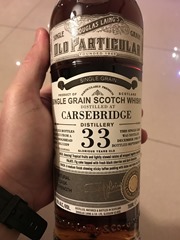 Nose - You don't get many ancient sherry cask grains, so when one comes along (like the 48 year old Whisky Agency Girvan) it's worth pouncing on it. This is a slightly shy dance between sherry (Christmas pudding mixture, wood varnish, ripe banana and toffee sauce), grain (apple and oak), and cask (milk tart, wax and orange), in much the same way Fig rolls are. Fig rolls are awesome aren't they? Think how you'd like a very old grain in sherry to be played out - it's like that here. Now, I don't know if this was 30 years in refill bourbon and then finished, and to be honest I suspect it was something like that from the nose because of the amount of yellow in here against the red, but I like it.

Body - More fig rolls, cocoa powder, red chilli and endless pastry. Some of the grain character makes itself known through lemon and wood splints mid-way through the delivery, but it's soon overcome by Mexican chocolate and yoghurt covered raisins. Weaker, more separated with water.

This is an exceedingly drinkable whisky, although it's all over the shop in terms of character and probably has nothing to do with Carsebridge (not that I’ve had much) or perhaps even grain whisky. Essentially it's a very nice, well matured whisky cocktail. 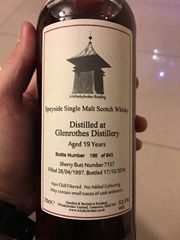 Nose - Funkier fruit here, riper. When I first nosed this on opening the bottle I thought I couldn't detect any Glenrothes but now it's starting to remind me of that tasting in the dunnage warehouse. I still think Glenrothes is best drunk very old in bourbon but this is quite classical. Black jacks, toffee, a little charcoal and strawberry laces. This is the kind of single cask nose that's fascinating and delicious but really, badly wants to be blended into something utterly majestic (single malt, but with other balancing casks).

Body - Hot red berries, sangria perhaps? Very sweet up front - all travel sweets and foxes glacier fruit. A light hand with the sulphur, nuts and raisins later. Red chilli takes the edge off the luxury a touch, but the tannins help. More strawberry with water, a bit more cask.

On reflection, this is classic big sherry Glenrothes. That doesn't mean it's as good as big old Glendronach, but it's pretty crushable.