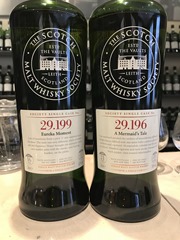 So the first weekly outturn in November has already landed, bringing some excellent looking drams that have already sold out.  I haven’t been able to get to them in time to publish before they came out but I will catch up.  In the meantime I have unfinished business at the bar.   So… rounding off this run of pairs before November hits, is a pair of mature Laphroaigs that have nothing in common except that they’re only available on the bar.

Laphroaig is one of my favourite distilleries when it does the right thing (by which I mean intense, medicinal peat against complex, sweet depth), and one of my biggest disappointments when it’s “lite”.

These two are well worth your time.  The first would be a great one stood at the bar to reward your Christmas shopping.  The second might come home with you after. 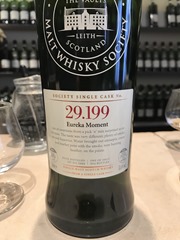 Body - Sweet, hot and sour, and only then, Laphroaig. Mint polos. And then, something altogether meatier and more important - chalky bonbons, numbing Sechaun peppercorns, bandages… but it's fleeting. And slightly addictive… activated charcoal and bunsen burners with water.

Finish - Medium short with hairspray and liquorice imps. Lemon at the end.

Definitely one to try at the bar, in fact I insist. Deliciously confusing. 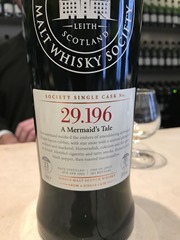 A complex and delicious whisky that would fly off the shelves for £600 as an OB. IBs have it harder, and I still have 23 year old open society Laphroaig to drink (see here, reviewed coincidentally as a pair from more than a year ago).  However, assuming you don’t: