A bunch of Springbank 21s. As far as I'm concerned 21 years old is over the hill for Springbankiness, but good 21s are just sublime whiskies. So - two privately bottled 21 year old casks and two official 21s, one of which is from the nineties. Perhaps a purely academic exercise then but at least I learnt something. 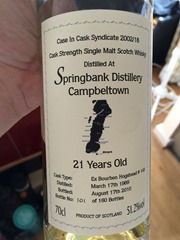 Body - Waxy, austere but largely perfect. More candy cigarettes, a ghost of Springbank engine oil, sticky plastic wrap. Crayons with water, that was unexpected. Very juicy next to that light peat though.

Finish - Very long, slight spice and funk, a strand of that pipe tobacco in the mouth. Bitter wood at the end. And what were those nasty little squash cartons that you stuck the straw in through the film at the top? That.

Everything you want in a venerable Springbank. And delicious too. Particularly good on the nose.

There’s a story behind this which ends with a friend asking if I thought a bottled cask of 21 year old whisky from some distillery called “Springbank” would be any good.

This is perhaps the most austere whisky I've given top marks to.

Thanks Sjoerd for the sample of this. 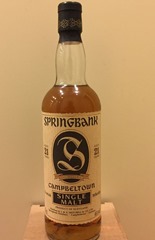 Nose - Ripe green apple, wax and Sauternes, red cherry. Incredibly inviting. Slightly Highland Park in its sherry peat complexity, ripe cask oils and something black and concentrated like pomegranate molasses. It's complex and Springbank but it's doing the over the hill thing compared to the previous one (although don't get me wrong, it's fantastic).

Body - Juicy, mature Scotch, ripe with black cherries and prunes, cigar tobacco and licked oak. Gentler with water, it loses a lot of its character.

Finish - Long, black fruit and chilli spice. I'm guessing chewing tobacco has a finish a bit like this.

Predictably this is probably the most drinkable of the three, and the least "interesting".

The latest 21, an interim Springbank 21 OB release, single casks this time. Different geographies got different single casks and we got an Oloroso sherry cask.  The 21 year old I tried in Campbeltown I still believe will be out in January 2017, which I will be buying. 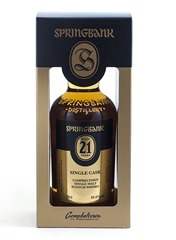 Nose - Quite straight up and down Springbank. I was expecting restrained, almost shy, but this is a bit more ballsy. That elegant but very confident cask wax is there though, behind the peat - very, very reminiscent of the Longrow 21. Give it time and there's earth, crayon, candle wax and a hint of stewed beef.

Body - I couldn't write anything first sip. You know when a delivery takes you on a journey, before you can form your thoughts, you're somewhere else. How do they do it at 21? It's all in the balance. Chalky, waxed fruit, lawnmower (petrol and oil, cut grass), black cherry and orange zest. Cherry pipe tobacco, and just in the top of your sinuses, sulphur and practically cabbage. That's a dangerous game but it's nailed here.

You really need to take your time with Campbeltown over 18. These were epic.