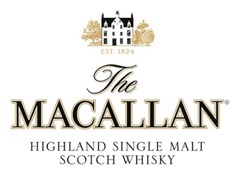 I’ve drunk quite a lot of Macallan in my time but barely written about it.  It’s position as *the* jewel in Edrington’s crown means that there’s a lot of premium whisky coming out of the distillery, and some very high prices for some quite ordinary single malt, and that makes the brand pretty unfashionable with the kind of people I hang out with.  As has been pointed out a million times before, that crowd make up about 0.001% of whisky sales and so Macallan has its market.

Anyway I’ve been enjoying Macallan more and more recently, for some reason.  My own internal fashion sense is swinging towards whisky at drinking strength – it might be because of the scores of open bottles of cask strength tasting whisky on my shelf I rarely turn to on Friday evening, it might be because I taste so little low strength whisky to write notes for this blog!  And there’s something honest about drinking well structured sherried whisky – like admitting you like Bailey’s.  Just enjoy it, it’s booze.

This has passed me by so far and is lamented for its lacklustre performance compared with the olden times. I'm sure they churn a vatting of this out every month at Macallan, but I know for a fact they take time and pride in doing it well.

Body - Light, gently sweet, some toffee, cardboard and the initial delivery has a noticeable lack of midrange.

Finish - Quite long, richer than the delivery, gentle wood tannins and strawberry laces.

Can you get a more regular, drinking whisky? But the nose on this is classy and delicious, I'm sure this used to be a lot better but I could drink this all day (happily, it’s at 40%)

This looks filthy in the bottle, absolutely cloudy with bits floating in it. Compared to the scrubbed, polished brightness of the normal output this is quite disconcerting!

A blend of 8 different casks, mostly sherry butt and puncheon.  Presumably more editions will be along shortly.

Nose - Darker and winier than the 12 (as you'd expect), richer fruit, cherry whistles, it has a much fuller "nose feel". Lip salve and marker pens, nearly - the ones that have an almondy note to them. Slightly burnt, a little bit toilet-like, weirdly. Wham bars with time.

Body - Deep, tannic and quite dirty/sexy. Oddly sweet and slightly nondescript, but it's extreme non-chill-filtering brings oils that save it slightly. There's an interesting sulphur here.

Macallan does NCF? This is oily, orangey and politely dirty. I may have to come back to this one. 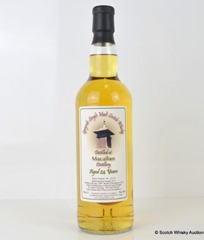 Nose - Mineral and medicinal at first, not TCP, more like citronella. A deep toffee sweetness underneath that, sharp and bright though. And then, after digging through that, there's something properly exciting… there's that classical cask influence, the tobacco, clean sweetness and preserved lemons. Almost Islay, but a deep Speyside sweetness.

Body - Zesty, floral, balanced and obviously single cask, but it could be any distillery on the delivery. But it's a nice drinker. A nice touch of spirit sulphur, lemon sherbets.

Finish - Tannic and waxed, plenty of vanilla and quite tropical, like mango yoghurt. Spicy at the end. Actually, the lemon sherbets again right at the end. No… actually some time later, soy beans. Go figure.

A complex and downright delicious single cask whisky, and more typical of Whisky Broker than Macallan, perhaps, although I can spot some common DNA.

Nose - Definitely not austere anymore (as it was at the outturn), this has been open nearly 2 years. Very sweet pear drops, glazed cereal, toffee apples, and tannic skinned but juicy ripe nectarine (it's a bloody hot day today and this is refreshing on the nose, like nectarines are). Behind this, the utterly classy dusty cask that's (actually) so rare…. More ordinary cereal with water.

This is a big whisky that you would have called for first fill if younger, and goes to show how special the gear Macallan has to play with is before they let it down with water and blend the hell out of it. I liked it when it was newly opened, but I think I like it more oxygenated. 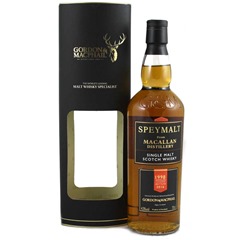 Nose - Sweet and wooded like wet, solventy varnish on fresh wood. Berried and cakey, like black cherry trifle. Those two things are simple but balanced, I have high hopes for this as a drammer. Actually this really opens up with water, there's more fruit and more dusty cask (than varnish).

Finish - Long and deeply sweet, we're down to fresh plums and raisins at the end. This is so thick that, despite the very low ABV, I'm going to add water - which brings more black fruit - blackcurrant jam nearly.

A fantastic, mature Macallan, right on style, very drinkable and an absolute bargain at £60. Still available at Green Welly. 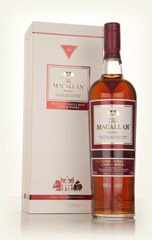 Nose - Inkily sherried, just backing off silly as good heavily sherried OBs do. After that, crayons and clay, heavily sedimented port and window putty. Back to the sherry; it's really very well played, although not anything I wouldn't expect as a matter of course from Glendronach. It's juicy though, like a NEIPA, and berried, like a blackcurrant boiled sweet.  And wooded like new pine box. I like it.

Body - Soft, red wine, black cherries, stewed tea. Competent but sour in the way that Mac can be, balancing sherry, wood, spice and sour… but a tannic bitterness and overly sweet Vimto delivery takes the edge off.

Finish - Long and berried, the sour becomes slightly peated, everything is well integrated right to the end but it just tastes… a little young.

Very obviously big cask plus young cask doesn't quite hang together the way they'd hoped. It's very drinkable for sure, but it's no classic. 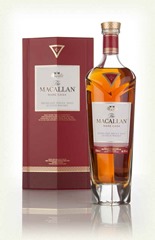 Nose - Ever so slightly classier while being sweeter and even more sweetly sherried. There's an almost rotten fruit funk in here which I find very appealing, and behind that pure distillery (the mash, the malt, the wood). Sweeter and cleaner with water.

Body - Much brighter than the Speymalt, slightly more competent than the Ruby but ploughing the same furrow. Sharper and slightly spicy but more interesting for it. Mango juice with water (especially texturally).

Finish - Really long, really, deeply sweet. Like sucking a boiled sweet in a hot car. Just balanced by wood though.

A big, big, boiled sweets whisky with depth and length. Meant to be drunk out of a cut glass tumbler after dinner, having enjoyed the theatre with the bottle, not dissected in a Glencairn.

Thanks to MBNDavid and the team for a taste of this all the way from Israel! 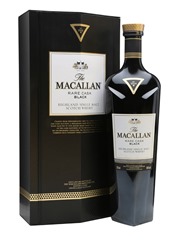 Nose - Unexpected. A little plasticky, some green apple, slightly Asian, quite deep wax. There's something BBQed on exhale, like a lit splint or licking your fingers after picking up a long-smoked piece of meat. With some time, something rather special develops… it becomes more sweetly Asian, with teenage cigarettes, and the exhale becomes funkier and sweeter.

Body - Dry and appley again. And just, frankly, a little old school. It is really tobacco-y too, and you know I love that. Toffee oils, burnt newspaper and balanced tannins.

Finish - More teenage smoking, this time it's the tar on the lips after a particularly satisfying rolly. Really, really tannic but very moreish, it reminds me of this bizarre clove, chocolate and tea hot-drink I had by the shot in Morocco once… no idea what that was, but it was merciless. And this has its soul but it's tempered.

I know it's not cool to like this, but I like this. Heavily sherried, oily with leather and tobacco. I could drink it all night.

First fill Oloroso Sherry Butt. I first tried this on the summer tweet tasting and saved the dregs for this flight – I never seem to write these MMD bottles up as there’s a disconnect between the tasting and the whisky getting bottled.  What are we actually trying?  Anyway, this one was good.

Nose - Fresh wine, perfume and lime juice. More toffee musk, there's a meal in here I can't place though.. Aubergine, ginger, green beans? I dunno… anyway it's a dark, complex, lacquered nose, really rich and satisfying, and that white wine and green herb is a breath of fresh air after all these OB sherry bombs.

Really meaty this, and a great balance of spicy, sherry fruit and savoury. Pretty robust though.