The legend of Phil Storry recently turned 40, and marked the occasion by hosting a birthday tasting at the SMWS rooms in London (a venue he spends almost every waking hour that isn’t spent earning money to spend in SMWS).  He was good enough to invite me to it and give me three months’ notice, which is sufficient to allow me to attend at the weekend.  There was intense snacking, some truly wonderful society drams including the only society Brora I’ve ever tried, and significant mocking of my (frankly, totally straightforward and comprehensible) 27 point scoring system in which 90% of the marks are awarded an A with various modifiers.  After the tasting Phil sent us all home with party bags.  Totally epic party bags.  This is therefore one of those blog posts which are full of whisky neither of us can buy, in which everything is excellent.

To take the edge off that I’ve further modified my scoring system just this once.

Modifiers are (for one night only)

- = Bit less than
+ = Bit more than, or with some good features
⊕ = Another bit more than, or with some very good features (I think of this as "augmented plus" or "circle plus")
⊕+ = Lots more than
' - slightly better than the similarly scored item in this tasting
$ - Chutzpah
µ - Unputdownable
Ð - Thank god for malted barley
Ø - Oddly dirty
ß - Wax monster
Ö - Olives
Æ - Baffling complexity
Ý - Perfectly balanced
æ - Like landing in a pile of duvets
† - Unputdownable
‰ - Over the hill
€ - Surprisingly good

I wanted to use the falcon’s head hieroglyph too but it won’t render on my phone so I’m not convinced it’s going to on yours. 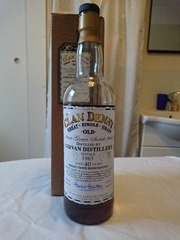 Nose - Deep, rich complexity, very warm, great toffee sweetness and baked apples, tons of dark wax. Sauternes and antique furniture, carrots on exhale (that surprised me). What a fabulous nose, you can see why Phil's so into grains.

Body - Incredibly soft and balanced, barley sugar and Ovaltine, the grain is unmistakable but it's so well integrated with the cask that it's lost the "hard" edge, it's more like apple juice and Chardonnay. Fantastic.

Finish - Very long and very grown up, lovely wine tannins. A hint of sulphur, some leather, some canvas at the end.

This is one of the best grains I've ever tasted (another was a very old Girvan with Phil too, funnily enough). These reviews are supposed to be frivolous but this whisky demands attention! Nose - Harder but no less important, fresher, brighter but well matured cask wax is the dominant note here and I wouldn't have called this for a grain on the nose. As hard as the other Garnheath's I've had but much more midrange in this one. More Chardonnay, a little cheap vanilla ice cream, some black pepper, even a little biltong.

Body - Beautifully floral with Whistle Pops but hard grain and oak backing it up. More white wine and a touch of petrol. Extremely drinkable.

Finish - Wax and black pepper on the tip of the tongue. Lots of toffee pennies at the end.

Tougher than the Girvan but extremely drinkable and while the Girvan was like a 40 year old malt, this is the kind of grain I usually go for. Lovely stuff. 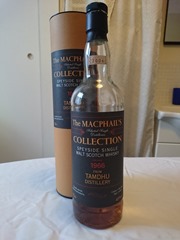 Nose - Now we're talking. At first (well, compared to those grains at least), funky almost to the point of cheesy, but the fruit behind it makes it sing (blood orange, grapefruit) with pastry and expensive vanilla ice cream. The funk takes a back seat to the fruit in the end. Glorious.

Certainly the best Tamdhu I've tasted, this is what you hope for when you pick up one of those perfume bottles. Just divine to drink, and perfectly judged. 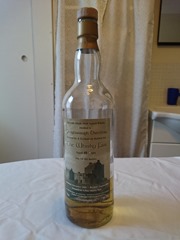 Nose - More heaven. I love Fino sherry whisky (and Fino sherry). There's a freshly poured apple juice (tannic and malic) note up front, hints of tobacco, even cordite in here. It's so fresh and alive, but very mature with it.

Body - Slightly speechless. Freshly squeezed oranges, warm wine, light spice, a touch of salt, a licked penny. It goes so well with that nose though, such a great counterpoint to the freshness on the nose. There's something to do with Chinatown here, I can't put my finger on it… and then it starts to pass into coastal deliciousness…

Finish - Salt water, fried whitebait, back to the white wine. No better place to be than by the beach eating seafood and drinking white wine. Right at the end; ryvita and marmalade.

This is the first whisky this yellow/green that I've given top marks to. Epic… 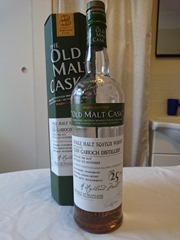 Nose - Warmer, softer… hard to live up to Glenglassaugher. Let's give it time… it has that old Glen Garioch thing of being waxy and fruity while tickling the tops of your sinuses with malty malt dust and old oak. Now, dusty refreshers and more interesting fruit - red apple, pineapple skin, brazil nuts?

I've a complex relationship with Glen Garioch (basically, when it's good it's amazing but I won't take the chance), and this is a very, very good one. 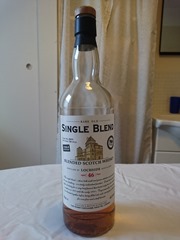 Nose - Varnish, more apple, old oak, very old cask (the deeply sweet, slightly lewd black fruit I associate with ancient Bunnahabhain). Cigar tobacco, wet marble, putty rubber and elastic bands. Red apple and magic balloons. Phil likes his apples. This feels generic after the complexity and confidence of this vertical but I did come back to it on a fresh palate and it's pretty glorious.

Body - Orange juice and zest. Orange barley squash. Balsa wood. It's a little over the hill in the delivery compared to the nose.

Finish - Crayon and heavy waxes at the side of the tongue. The backtaste from a hoppy IPA. Slightly sour and numbing, like oily Sechuan peppercorns.

Complex and fabulous on the nose, it doesn't live up to the hype on the delivery but then that's sometimes the way with very old whisky.

Obviously P = A and when have you ever seen the “per thousand” symbol (‰)  used?