This post was going to be all about Whiskymakers. Two in particular - John Glaser of Compass Box and Max McFarlane of Edrington, who makes Highland Park official bottlings. I listened to John Glaser talk about this during the Compass Box masterclass at TWE at the end of last year, and I spent some time with Max in his lab at Edrington in Glasgow in the middle of last year.

By Whiskymaker, they mean someone who takes more than one cask of whisky and aims to produce something specific. Max takes many, many casks of Highland Park of various ages, profiles and (in particular) colours to consistently produce everything from Highland Park 12 to King Christian 1. Watching him work, lining up the many sample bottles in colour order and marrying them over time to produce something he's aiming at was very cool, but he’s making just one range. John Glaser has the freedom to take casks of anything, to produce anything he wants, to hit his vision for the whisky. In his view the combination of the distillers decisions, the place, barley, process, cooperage and then blending is what makes Compass Box whisky makers. 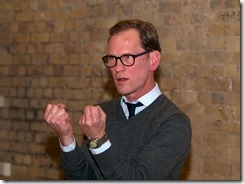 So what's this post about now? Well my notes from the TWE tasting are all over the place, I got a bit carried away listening to him talking, drinking and didn't write enough down. Trying to make head or tail of it later became harder and harder, meanwhile my notes for Flaming Heart and Luxury Whisky weren't getting out of my notepad either. Then came Enlightenment and The Circus and something had to give. I'll publish my notes for the absolutely sublime Highland Park 25 another time - Max did let me try some of the 40 year old but I was being too polite to write notes. That 50 year old Macallan was another matter though… 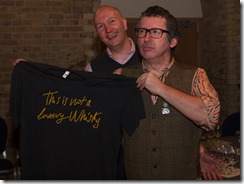 Suffice to say (as I have before), I see whisky blending as a real art. Single cask stuff is (like most photography, thanks Phil Storry for the photos in this post!) found art - which can still be amazing but is a bit more haphazard. Whisky has an amazing ability for the whole to be far, far greater than the sum of its parts when expertly mixed - apparently it's just chemistry and time. I have some blends in glass that I've been experimenting with that have been marrying for 6 months, we'll see what they're like another time.  This post is just about Compass Box.

Some micro-notes from the masterclass first.

1 cask of Caol Ila 12yo refill hogshead, 1 cask of Caol Ila 14yo recharred plus lots of Clynelish. Most Compass Box whiskies seem to be based on Clynelish (as were the battle of the blends whiskies) or Caol Ila - John said from 6-10 years old it's beautiful and distinctive, in its teens it's ethereal.

Reviewed before.  Primarily Clynelish, 9-11 years old, with secondary maturation in high spec French oak casks. Originally with inner staves (but fell foul of the SWA "no internal structure" rule), so then with cask ends to get the same result.

Finish - Balanced tannins but a little one dimensional. Delicious though.

These next set from samples provided by Compass Box.

Nose - Really balanced. Like a luxury whisky that doesn't want to offend but needs to show complexity - this makes me think of 55 year old men who run whisky blending companies. Hard to pin it down in fact, I'm so used to writing extreme notes for single cask firewater. So, it has toffee, ozone, sandalwood, wooden rulers, cut plum, Sauterne and putty rubber. And granite. And cut flower stalks. And it kind of smells like coca cola.

This is an almost baffling whisky - simultaneously restrained but incredibly complex. I guess that's what happens when you apply blending skill to high quality ingredients. I must drink more top quality blends… oh here's one.

Amazingly still in stock, you should buy a bottle of this and two of the Enlightenment ASAP.

Nose - It's a combination of old dusty Islay and new cereal, fruit and wax that really works. This "marrying" business is remarkable, they come together so well. Fruits are raspberry, a touch of peach, and the wood is clean and newly washed. Absolutely delicious. With water, even more wax, quite dirty now too, pretty epic.

Finish - This is where this whisky really sings. Deeply waxed, almost meatily so, with propane and pasta. Complex and satisfying, plays rather dangerously with the sulphur and wins; a very long, complicated and interesting finish.

Perfection. It's (honestly) quite hard to stop drinking this damn whisky - complex (a real journey), and utterly delicious.  Buy it!

Nose - This is also beautiful. It's like they’re taking cheaper components, adding value, charging a bit more and pocketing the difference. What a great business model! My first impression is of high class wax and cask, then citrus (grapefruit juice), but backed by a deeper fruit, like mango and orange juice. The whole thing is happily knitted together by bright, floral perfume and vanilla. Refreshers complete the illusion of something five times the price. More orange juice and fresher with water.

Body - Complex, robust, changing. Sweet and dusty, much more wood on the deliver, a touch of sandalwood and orange barley squash. Much softer with water, it's better at 46.

The nose on this badboy is far in excess of its price point. Just wonderful. The delivery is excellent but just shies away from masterpiece levels due to some holes in the midrange, and a touch of cardboard.

That said this is a fantastic whisky. I bought two - one to drink, the other to drink. They'll be, like the flaming heart collection, whiskies I turn to with relish (and often) long into the bottle.

Nose - Big, old and fruity. But not structureless or flabby. Old, heavily waxed and polished furniture, ripe pears, caramel in the background. Quite musty and slightly herbal too, with Nice biscuits (wheat and vanilla) and charred rosemary. Some marker pens, some bourbon soaked raisins. It really reminds me of one of those big old bruising OB Glenfarclas, about 30 years old… just with a little bit missing.

Body - Sharp, slightly sour sherry cask, back notes of hard grain oak, but give it time and it starts to really come together… Ribena and mango juice, cigar tobacco, a lovely balancing sulphur.

Finish - Slightly sharp, slightly hot, more Nice biscuits, very long with the old grain. The sherry is washed away by the end.

This whisky has "important" written all over it, particularly on the nose, but loses its way in the delivery. Does the discovery of these already-vatted whiskies take something away from the maker and make the whisky more found than made? I think the balance is better with the enlightenment.

One last one, thanks to Stumbler for a dram of this. I am very jealous of those who once had a bottle!

Nose - The balance! Clean, sweet, sharp, appletize and fruit salad chews. Fresh and clean, lightly waxed. It has it all really. Beautiful. With time, some fresh fruit (orange, mango), perhaps a cocktail on a summers evening?

Body - Perfect. Warm, ripe, fruity, waxy. But so full and gentle. Mango it is.

Finish - Clean, grapefruit bitterness, full and citrussy. Brings you back in for more.