A big flight of epic Tomatins

The new Tomatin bottle and packaging is pretty lovely, but it's been a while since we had anything super cool out of the distillery, like Contrast or Cuatro. I'm sure there'll be something along soon. Meanwhile, a pretty awesome flight has built up in my backlog, totally due to whisky friends like Stumbler and Veira.

I warn you though – look away if you’re not a fan of enthusiasm.  There’s some big old gear in here.

Thanks to Stumbler for this gem!  A blended whisky. 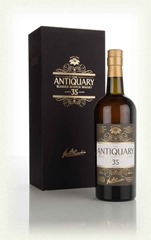 Nose - Heavenly and robust? Blackberries and floor polish, tobacco and leather belt. It's a blend, so of course the whisky maker is able to balance this out and it really is both interesting and luxurious on the nose. And pretty old school too.

Finish - Long and very tannic, blackberries again at the end but it's surprisingly astringent. On first sip this is a bit of a downer but of course it pulls you back in for more black fruit and that complex, mature nose. Almost like they planned it.

Absolutely delicious. The body is surprisingly charred wood and lands in dry tannins but that blackberry brings it all together in fruit and leads you back for another sip. It's just lovely, once in a while, to drink something designed rather than discovered. Cracking stuff.

Thanks to Matt who scored a bottle of this and the virgin oak at the distillery and split it with the team. 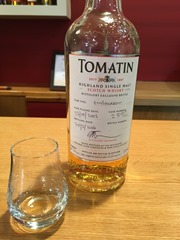 Nose - Young and fruity, hard wax and just a kiss of smoke? That wax strays into (thanks to that smoke) black cherry and almonds, and there's a touch of funk with window putty - something I often get in the (lightly peated) Highland Parks. Limoncello on exhale. Water and a little time gives big fruit and oily citrus, and a slightly Springbanky engine oil on steel quality. Pretty awesome.

Body - Spicy - well it's very strong too. Numbing oils, lemon and peat, that numbing's quite like the bark on some good BBQ; charred sugars and numbing tar. Much sweeter with water, slightly funkier. It's definitely young but it's a really good one.

Finish - Long and lightly tropical, preserved lemons. A touch of gunpowder with water, lemon sherbets, Sichuan peppercorns at the end.

These big, young bourbon single casks can be so delicious when writing notes, but absolute bruisers when you just want a dram. A fantastic cask but perhaps tasting rather than drinking whisky.

An official single cask bottling for Bresser & Timmer, a booze shop in the Netherlands from what I can tell. A bottle we split and shared.

Nose - Dry, nutty and a bit dirty. Candy cigarettes and instant coffee. That dirty, dry sherry does rather cover over the spirit and wood, but underneath there's quite a lot to look for… if I can just push aside the fag ends and mould…. Black cherry again? Candy floss and fruit toffee. Milliput. Dirtier with water, verging on Gorda filth.

Body - Dry, robust, nutty, definitely PX with charred raisins and lots of toffee. Sulphur and chocolate brazils. Softer with water, either I'm just getting used to it or the whisky is coming together.

Finish - Beef and prune tagine, all the way down. Actually, soft liquorice at the end, very distinctly. Astringent.

I have to admit I was pretty disappointed with this when I first cracked the bottle but it opened up with time and water helps too. It's complex, a little bit dirty (but perhaps not quite enough given the interference of the cask with a quality spirit) with lots of discover. I'm not sure I'd go back for a full bottle though.

Nose - Clear virgin oak, hard but ripe fruit like pear, cherry lip salve, surf board wax. There's a big hit of cherry imps in here to - sweet, hard and artificial (not that that's a problem, in the same way the urinal cake in the 36 (below) isn't). As I've said before, I love these charred or virgin oak Scotches because they scratch that cakey bourbon itch but carry the complexity and gravitas of Scotch too. Fruitier and almost coastal with water.

Body - Intense, black oak and Indian spices (turmeric, asafoetida), chewed menthol tobacco. Pilaf, with charred onions with water. That's not a fault, the sulphur works well with that intense cask. It's more and more drinkable as you settle into the glass.

Finish - Long and intense wood oils, black tea and walnut shells. A touch of Sudocrem with water and time, just slightly medicinal and creamy, and big hop bitterness, like a super-IBU IPA. Sulphured, dried mango slices at the end.

Tough but rewarding, this is the kind of robust, complex and fascinating Tomatin I wish SMWS would release every couple of months! It's been a while. Talking of which…

From my own collection, from auction, but Stumbler scoring that other old society Tomatin inspired me to buy it.

Nose - A bit like the handfill bourbon, but better (more rounded). Young and fruity but the toffee, smoke, funk thing is a bit further forward, better rounded and it's a touch more medicinal. Maybe it's time in glass that's done it? Hard, funky and a little bit odd, better in real life than on paper. More tropical with water, pineapple juice.

Finish - Long, complex and very fruity, you can see why the Cu Bocans are so much fun to drink. Quite BBQ/Virgin oaky too, like pineapple glaze on ribs.

Anyone wanting to surprise and delight a blind tasting should pick up a bottle of this. Young and (frankly) heavily peated, with tropical notes throughout, nobody would suspect Tomatin, but the hard fruit was there all along…

Next, two Tomatins from Whisky Broker… from the same parcel, but bottled 9 months and 13 days apart.  And labelled using different label printers.  These are gone but he has a 21 year old on the site at the moment.

Nose - Clear but austere, hard waxes and plastic fruit. Slightly metallic, a little young cereal, mint toffee and fresh cut flowers. Much better with water, more open but the kind of vanilla and cake I'd expect from a bourbon cask.

Body - Much sweeter and completer than the nose suggested, almost Glenrothes at the start with hot cereal and then some of that fruit and sulphur funk that the 70s stuff usually has. Even fruitier with water.

Finish - Long and deeply sweet, very rich and oily, not austere at all.

A hard, young nose but a big, rich and oily delivery with lots of structure that promises at something that could have been epic at 35.

Body - Sweet and hard again, like a gobstopper. Menthol tobacco. But with time, juicy fruit chewing gum and sandalwood. A touch of spirit sulphur with water, I'm really starting to enjoy it now.

Nose - Now that's an old Tomatin. Hubba bubba and mangosteen, lovely ripe tropical fruits, cleaning products and crayons, quite sexy. I think this is what I said in my last notes though.

Body - Soft and dirty fruit, balanced structure though. A touch of licked pipe tobacco, and hint of sulphur. This is what's so awesome about these old official Tomatins, it's the lewd fruit and balanced wood structure.

Finish - Medium, slightly fetid wood, drying tannins at the end brings you in for more.

My opinion of this has definitely gone up over the last two years. Maybe that's because I haven't had a bottle of the 30 open in a while. Anyway, what a cracker.

Reviewed before at the same link before, just having it again to compare with the 36 so I won’t write too much.  This is one of my favourite whiskies of all time.

Body - It makes the hair stand up on the back of your neck. Deep, intense, perfectly balanced at the top end with ripe Asian fruit and lots of spirit sulphur which has intensified over the years against the wood.

Finish - Long. Perfectly balanced with an otherworldly intensity of fruit and sulphur. Still as epic as ever.

Thanks again to Stumbler for a sample of this, an official 36 year old. The main event in this flight, bourbon and oloroso casks, 800 bottles. 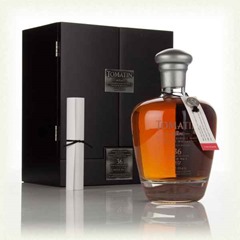 Nose - It is of course a fruit bomb. Complex, ripe fruit, Seville orange zest and besswax, but it also has that delightful, throat catching vanilla pastry, floral tone that reminds me of hubba bubba, cross channel ferries, the dearly departed OB 30yo and the Cadenheads 35yo. It's perfect.

Body - Fascinating. Spicy initially, apple wood and perfectly judged sulphur, tannic and well-structured but enormously luxurious. If you just start drinking it, the tannins start to build and your mouth becomes slightly overloaded with oak, but the sulphur pulls you through this. Water makes it juicier but more ordinary.

Finish - Apple Danish, urinal cake (piney), long, soft wood and tannins with loads of reverb. An Asian fruit, nuttiness at the end like lychee and Durian. Funky fruit dominates with water, and the finish is deafening and very long… after a few minutes I'm thinking of beer fermented with Brettanomyces.

This lives up to all its (sky high) expectations and is the epitome of 70s Tomatin. Fabulous.

Compared to the 35, the nose is more polite, less alien, but classier for it (honestly the 35 is just loopy). There's sherry in the OB too, which softens things further. But the 36 is just one of the most poised, well-constructed whiskies, totally drinkable whiskies I've ever tried.