Laphroaig Lore and some big Friends

“Over the years, each has passed on their skills and traditions to the next generation to continue this legacy. To honour this passing of knowledge, our Distillery Manager John Campbell has created Laphroaig Lore, the richest ever Laphroaig. Lore, meaning the passing of a skill or tradition through word of mouth, is the story of how we make Laphroaig, encapsulating the craft passed down from generation to generation over two centuries.”

That’s clear then.  Says here that it’s drawing from vintage 1993 going forward to consist of a mix of Scotch ranging from 7 to 21 years old

“the peaty power of Laphroaig in the same vein as Quarter Cask but with the smoothness of double matured stock finished in European oak hogsheads. To add even further depth and complexity we used our most heavily peated whisky matured in ex-Laphroaig barrels along with some fully sherry matured casks”

Who knows.  Just like Laphroaig Select was anything but select, Laphroaig Lore seems to be anything but classical Laphroaig as passed on through the generations.  To be honest I don’t really care but I know what I really crave/look for in a Laphroaig and last year’s 200th anniversary 15 year old had it in spades compared to this.

Nose - Dry, biscuity, coastal (salt and vinegar), lots of BBQ tones; charred wood, sandalwood, roasted pork fat and crackling. A slightly jarring sweetness behind this although it does save it from being uncharacteristically dry.  With time this does come together more (more fruit) and starts to become the point of the nose.  It’s very strange though, I would have called this as Ardmore rather than Islay, it’s a different peat character somehow.  Actually on tasting, it’s more like an Octomore 07.4 lite on the nose than a Laphroaig, weirdly.  Virgin oak in here?  But then, pure mezcal with water (a touch of Uisge source Islay no less, thanks Douglas Laing!).

What's not good about it - Oddly dry, and takes a little getting used to - if you thought this was going to be another Laphroaig Lite you were wrong The black pepper tone and dryness throughout is very strange and not very Laphroaig.

What's good about it - Complex and quite challenging, like a Belgian beer, it might take a little getting used to. Love the bottle design.

I reserve the right to come back to this when it's opened up a little. This bottle is hot off the press.  I do like it…. it’s a bit odd though.  Young, complete, drinkable, definitely.  Laphroaig, no.

I gave this a somewhat summary treatment when I blind tasted it before, so let’s have it again.  It’s a cracker.

Nose - The cask on here really is beautiful. Fresh, juicy, orange wax, robust and exciting. This time I also get fresh blood, cut grass and honeydew melon. After sipping, the nose has tones of old Islay in it (refreshers, etc.), this is accentuated with water.

Body - Big and tobaccoey with lamb and mint, lots of ozone (yet rich with vanilla custard). Ripe peach with time. Easy drinking and robust peat, it's a Laphroaig that really is richly flavoured, pretty old school.

What's good about it - but it's a proper drammer. Delicious and structured and hints of great old things to come with digging.

This was a truly delicious whisky, I hope you got your stash of it.  I was trying to be good and didn’t, what an idiot.  We did split a bottle though.

Stumbler shared this with me, thanks mate. I tried the other one here and it was one of my favourite whiskies of all time. 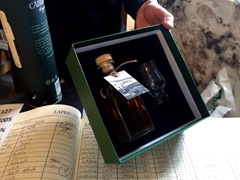 Body - Harmonious and peat-cereal led - but I would have called this for an Ardbeg. Not sure why. Front of the tongue is like licking chalk.

Finish - A great sour/tannic/peat finish, good and long and quite grapefruity. Great fun.

What's not good about it - another one from Stumblers mega tour of the distillery, so completely unavailable.

What's good about it - a great, big, balanced and intense Laphroaig. Fruity and fierce on the palate and long and rewarding in the finish. Lush.

Caused some upset when this landed at a half bottle for £100 but turns out that’s the same as a full bottle for £200 but you can drink some and keep some.  Wiser people than me did that. 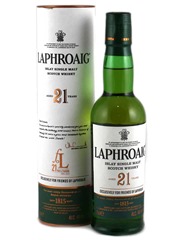 Nose - Ahhh… that's what I want from a Laph. The fresh bandage and fruit combination is so perfect. Peach and mango, parquet floor and an old library. It's like going back to school - coloured inks too. Almost perfect.

Body - The younger side of dusty alien Islay… lots of bitterness too, but that is a component. Refreshers, pear, flat lager, chilli and wood. Quite thin in the mouth, but so bitter and tannic that it really works. It's exactly the kind of divisively amazing Islay that haunts me, and I suspect there is some significantly older Laphroaig in here than 21.

Finish - Very long, a little ashen, lots of old cereal and epic pear. Bitter, bitter cereal at the end, but… after that even more deep, dark toffee and massive oils. Tannic and fabulous.

I'm convinced there's a lot of older whisky in here - but the younger stuff really gives it an edge.

What's not good about it - expensive for sure.  But cheaper than cars.

What's good about it - This is definitely for the friends of Laphroaig. Big, complex, challenging, very Laphroaig and absolutely wonderful. Old Islay rocks, and old Laphroaig rarely disappoints, especially when the distillery blends it.

MoM say that this is "exclusively first-fill Oloroso Sherry cask matured" but John Campbell told us at the whisky show that it was "40% 32yo refill oloroso, 10% 35yo first fill oloroso, 50% 34yo bourbon hogsheads. All European oak.". Which is why it's so deeply epic.

Nose - Fresh, tropical (pineapple, mango), very important and slightly sexual (musky and weird, like truffles are, but fruity). A slightly austere sweetshop with bakewell tart (all of it - glacé cherry, soft icing and vanilla pastry) and fireplace ash. Cherry tobacco with water, beautiful.

Body - Warm, ripe, spicy, enormous tobacco, cigars mainly. Like being 20 and king of the world (yet skint) and smoking a cigar. Charred cardboard and burnt wood make this less luxurious and alien than the nose promised but this is still a triumph.

Finish - Long, spicy and ashen, raisin and burnt sugar, liquorice imp and lamp oil right at the end, with refreshers haunting the top of the palate throughout. Fruitier and sexier with water, although much more tannic right at the end.

What's not good about it - Much more robust that you might guess for 32. And you can buy a better whisky at this age, in this region, for less, with the Indies.

What's good about it - But that's in the eye of the beholder and I love that about it. The filthy nose and robust (but confident, delicious and moreish) delivery are a real dramming combo.