Malted at Springbank, the malt kilned using local coal and local peat, made using local water. Single farm, single barley variety (same as the 2011 society bottling in fact, same year, is this the same spirit?). There's more provenance here than you can shake a local stick at! I'm a big, big fan of terroir led whiskies and "local barley" - the laddie and Octomore ones have been awesome, the other Springbank local barley I've tried (the society 2014) is epic, and Arran's Bere Barley is awesome. Maybe concentrating on the barley really is massive in whisky? And so is the yeast (a la London Distillery). If so Waterford Distillery is onto something awesome.  Or maybe it’s just that taking the time to make something special really does make it special. 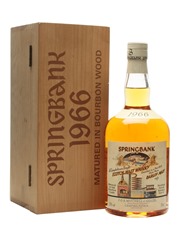 The release of this whisky at around £95 saw a flurry of activity.  The original local barley bottlings are the stuff of legend, and with the 2014 society local barley bottling rapidly becoming the same, it was understandably popular.  Cades had it in first, which is where the bottle for these notes came from (they’ve just announced February’s epic outturn).  They knew me well enough to put me on the list.  Other suppliers have come online and sold out since, with only a small amount of shameful price gouging from some you’d expect, and others who should know better.  TWE is still to show so there’s still chance to score one of these, and in the meantime, you can get a nice selection of the original bottlings there.

Anyway, this marks the first of five annual local barley bottlings, each exploring a different barley variety or farm. Each will have a different ratio of cask types. I am led to believe that this will be the eldest of the series. 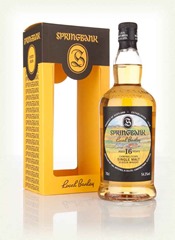 Nose - Everything about the whisky, before you taste it, shouts honey - the colour of the whisky, the label, the box. And like honey, the nose on this is instantly thick, slightly musky, sweet and ripe. Then it's pure Springbank - slightly mineral, toffee, apple, machine oil and oak. With time, applewood smoked rye whisky, red wine stew (there's almost a hint of horseradish sauce here) and pencil lead. But this is big - totally Springbank with real gravitas.

Body - Ripe but balanced, a big sweet petrol hit and fairly hot. Quite peated, really, quite spicy, you know you've had a sip. The front of the palate is pure, sweet Springbank, then toasted malt, then almost chocolate malt. There's the hard toffee from an Eclair. With water, the heat is gone and there's a perfect mix of sweet, sour malt, toffee, coffee and wood. And a blessed touch of Campbeltown funk.

Finish – Very long, nicely interwoven strands of sulphur. toffeed. Extraordinarily morish with water, that sweet/sour/funk thing runs, next to the Springbank engine oil, with berries and citrus pith right through to the end. It's actually quite hard to stop sipping it.

As Matt said, expectations were high for this one.  This doesn't disappoint.