More Springbank, their associates, and some news

When people ask me what my favourite whisky is, I honestly find it hard to answer.  I mean, the reason I love whisky so much (particularly Scotch) is the diversity (the infinite complexity!) of it all, so how could I say one style, one distillery above another?  But looking on my shelves, it’s clear that I favour this particular distillery and its many offshoots (including Longrow and Hazelburn but also Glengyle (Kilkerran) and all the many wonders that come out of Cadenheads).

So below are a bunch of Springbank related whiskies that have been building up (I keep drinking them rather than writing about them), including the new batch of what I usually settle on as my favourite whisky if pushed, SB15.  Here’s the news though, in February Springbank Local Barley will be back – the Local Barley 16 year old will become part of the core range.  The 14 year old Society local barley from 2 years ago is just spectacular (review here), and this bodes very well for the 16 year old. We’ll also get batch 12 of the Springbank Cask Strength 12 year old at the same time, and I may even publish my mega-vertical of CS12 batches then.  Or maybe I’ll hold onto it for another couple of years…

Who knew there were identifiable batches of Springbank 15 year old? I didn’t, until Stephen from Cadenheads pointed out the new batch was a cracker. This is mostly sold out, certainly is at Cadenheads. They had to bottle a new batch way ahead of schedule (in October 2015 rather than June 2016). 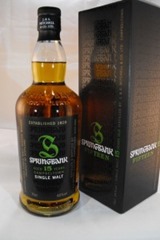 Finish - Some bitterness at the end… chewed aspirin takes the edge of the luxury but I'm reminded of my youth a little with some fag ash and boiled sweets. But this complex, challenging, fruity, sweet whisky deserves another sip…

I have the heel of a bottle of Springbank 15 year old from last year so let's see. The nose is a bit more grown up on the older batch (although that could just be more time in air), I definitely still get the kebab shop overtones I got last time. Those are entirely missing from this new batch. The older batch is arguably waxier on the nose but I don't recall it being that waxy on the delivery. On the delivery, the older one is softer, more wine, less fruit. The finish is less challenging and a little longer. Generally the older batch has more wine, less sherry. Both are wonderful whiskies though. Now I just need to source a sample of the October 2015 batch before I can finally put to rest my 2014 bottle…

And yes, really A⊕+ - everyone has their favourite Springbank.

This was first shown at the Campbeltown festival 2015 and its legend spread slowly from then, with good cause. When it appeared a month or so ago, it sold out almost instantly - that's word of mouth recommendation for you! There was another (to quote a certain currently fashionable film) at that tasting that I think we might see early next year, watch this space.

Meanwhile there has been other interesting experimentation at Glengyle.  They are starting to produce more heavily peaeted spirit so we will in due course start to see some Longrow style Kilkerran to go alongside the Springbank style currently being sold.  And while we shared the allocation of Calvados casks with Germany, they’ve also been filling other fun casks and sending them overseas – Gaja Barolo to Belgium and New Zealand, Marsala cask to China, Japan, the Netherlands and Switzerland, Madeira to France and Taiwan and Lafite to Denmark and Italy.  So far they have escaped my grasp but I’m working on it…

Body - Very winey - unlike the nose this screams red wine cask. Then it's all big, dirty Springbank - oil, funk, toffee and refreshers. And apple chews.

What a fabulous whisky, and it's unbelievable that this is only nine years old. I think there's a little more luck than judgement in this cask, but recent Kilkerran releases are becoming so bloody amazing that I think they're starting to generate their own luck. If you see one of these for sale, bite its hand off.

Thanks Franck for a taste of this beauty!  I think this was bottled a long time ago, I can’t find much information about it at all.

Nose - Immediately I'm into toe curling territory. Intensely sweet with a green apple and chalk brightness matching the Springbank engine oil. There's something particularly ripe about this one though, with added fresh clay in the art room, wet cigar tobacco and a really farmy, earthy, dungy backnote to it that sounds (I suppose) bad but works in the same way that it does in South West France with their really dirty, black wines. Dusty too. Jeez. Very dirty, very good. Even better (riper) with water.

Finish - Dirty, a little spicy. Lots of oils at the end and tannic oak, a touch of overstewed tea. Hmm… this bitterness is a touch overstated, maybe that's my palate today?

Either way this is a glorious whisky. What a smasher! 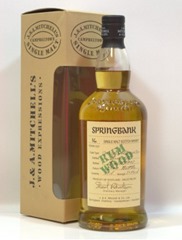 Nose - Intensely winey and sweet, unmistakably rum backed with tart tatin and bright, ripe pear flesh. The spirit just fights through the sugar with a breezy minerality that reminds me of liquorice torpedos. Feels a bit young or unblended though, a bit single casky in its single mindedness. Much more integrated with water - ice cubes and strawberry laces, some springbank oil and funk, some orange curd.

Body - Lots of liquorice, intensely sweet and black. Topped by refreshers and cranberries. Slightly odd and astringent actually. Again, significantly better with water, and some of the engine oil from the spirit comes through.

Finish - Long and fizzing, very alcoholic. With water, woolly green apple - very fruity. Lovely cask musk and honey burps though, that I can stand behind.

A bit of a bruiser this - that rum cask even knocks Springbank's spirit sideways. This is pretty delicious but a big gap in midrange takes the edge off how much fun it is to drink.

Distilled in October 1996, matured in refill sherry for 7 years, then finished in first fill Marsala for 2 years, bottled in August 2006.  7740 bottles.

Thanks Cuan for a toot on this badboy. 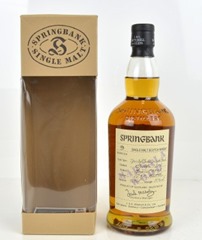 Nose - Bright, appley and breezy. The Springbank funk is sharper and fruitier than normal - winier I suppose. Dusty with unlit joss sticks and more farmyard overtones. Dirty, funky, oily yet still refreshing. It's youth is not apparent on the nose either.

Body - Much warmer, waxier and sweeter than expected, lots of wine though. Black grapes, baked plums, almonds and pastry. Next, sour and fizzing. Then dusty and slightly alien. Much more "simply winey" with water. Something to play with there.

Finish - Long, astringent but backed with sweet fruit and wax. Fizzing at the end.

Absolutely delicious - like the Kilkerran, it's an appley, complex, confident young whisky that doesn't put a foot wrong. It's young Springbank like this that makes you realise that it's the combination of fantastic spirit and unconstrained cask excellence (perhaps due to the fact that Cadenheads appears to own a significant percentage of the stock of mature whisky in Scotland) that really makes Springbank rock.

Thanks to Mark for a big slice of his bottle of this - I've really enjoyed getting to know it!

Nose - Big sherry influence here with the peat playing the teenage girls and smoking thing that really triggers the nostalgia. Window putty, caramelised apples, toast and honey, but the main themes are gentle peat with big fruity sweetness (strawberry laces I'd say). It is a little restrained compared to some in this set - I found the same with the Springbank 18. I need to get my hands on a Longrow 15.

Body - Like that teenage me I was mentioning earlier, this is complicated and not terribly well balanced. Biscuity peat, a touch of sulphur, fresh tobacco, big wax and tannins. Pretty tasty though.

Finish - A little dirt, a lot of liquorice, Marlboro lights and oak. Long and interesting.

This is very good, I don't seem to find Longrow quite as arresting as Springbank though, despite the extra peat. Springbank's like Highland Park in its peatedness, it doesn't really need any more.

Fourth in the series of Longrow Reds (Cabernet Sauvignon, Shiraz, Port) this one is 12 year old Longrow just finished for a year (the Port cask was full term) in fresh Pinot Noir cask from New Zealand. 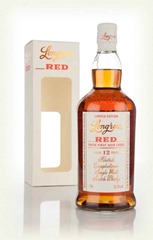 Nose - Intense, young and cereal led peat, this noses a bit like a complex Port Charlotte mixed with Longrow. Still getting the baby sick note here (echoes of Laddie I suppose) with orange sorbet and refreshers. There's (to continue a theme) a bit of a Rennies note to this too. Significantly younger smelling than most of the other whisky here, weirdly. With water, more toffee, more gunpowder, more competent. Overall it's good though - it has that open handed fruitiness I really enjoy from Campbeltown.

Body - Soft, gentle, winey then a massive belt of peat. Have they been stepping the peat up on these? Dirty and bitter. Much fruitier with water.

Finish - Long, gamey and highly oaked. The wine is rich and stewey here, stewed fruits and meats. With water, very long and an almost Sauternes sweetness runs through it.

An awkward whisky; there's fruit, peat, bitterness, sweetness but it lacks integration. Water helps, a lot, but it can't compete with the others.

5.5 years in bourbon followed by 1.5 years in Gaja Barolo casks. These young wood series bottlings from a while ago are pretty good eh.

Nose - Red wine and then baklava and slightly burnt toffee. Perfectly balanced peat, you almost don't notice it because of its integration but it's significant. Great ozone and coastal balance too. Deeply delicious really.

Body - Softly sherried, cereal and toffee, clean but rich. Fruits are mango and peach, with a touch of refreshers.

Finish - Cigarettes and toffee. Spikey, astringent but deep, winey and soft too. At the end it's like the aftertaste from cigarette tobacco in your mouth.

This is a glorious whisky where the cask totally balances out the young peated spirit. It's like a parody of "smooth".

Awesome stuff… there’s some society bottlings and a handful of 21s to come soon, can’t wait for the Local Barley.  Cheers!