Japanese Whisky 6: Mars and the rest…

Mars whisky is the brand name applied to whisky distilled in the Shinshu distillery, which is owned by the Hombo brewing company. The distillery produces other spirits than whisky and stopped producing whisky altogether in 1992 through lack of demand, and only started again in 2011. So there's a natural gap, a change in production and a sense of this being a "new" distillery once again.  Everything I’ve tried has been from the new regime… except one.

I’d posted a couple from Mars before (here) including the Maltage 10 year old, which I’ve been enjoying working through the bottle of.  Seriously drinkable!

First off (and in the interests of ending on a high note!) I’ll mop up some of the other distilleries I’ve tried.

Akashi / Eigashima 5yo white wine cask finish for Gaiaflow, 58% B-

Eigashima is a producer of sake and shōchū (a weak distilled liquor made from various grains) that moved into whisky production using the equipment and experience from brewing and distilling shōchū. A dedicated whisky distillery (the "White Oak Whisky Distillery") was built onsite in 1984. The distillery is located in Akashi City and so the whisky is called White Oak Akashi single malt. Amazingly they import their barley from Scotland (contrast this with Paul John in India who use Indian barley but import their peat from Islay!). 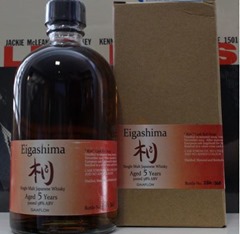 Body - Sharp and savoury, lemon and sandalwood joss sticks, flat pack furniture (MDF) - very distinctly. I had it on the nose but couldn't place it. Rescued somewhat by some pear. Water softens things out but this is still painfully young.

What's not good about it - Infanticide. It smells and tastes very much like a pellet smoker.

What's good about it - Some good stuff starting to show here, an interesting peek into what's to come from Eigashima.

Fuji-Gotemba is a distillery owned by Kirin, located on the side of Mount Fuji, a location selected for its climate and quality of water.

Body - Here comes the youth though - bourbon like in its virgin caskery. Blueberries and blonde wood, sweet bourbon.

Finish - Medium, sharply new oaky. Quite winey at the end though.

What's not good about it - Simple and young delivery, lacks complexity and integration.

What's good about it - A beautiful nose, sweetly balanced and winey, with complex bourbon overtones and a freshly opened flat pack shelf.

Fujikai is a whisky produced by Monde Shuzo distillery, owned by a wine producer. The only other whisky I know of by this producer is a blend, Isawa. That's about it for intel, I'm not sure what they're doing with this one but I'm sure we'll see a few more bottlings. Anyway, it came out, we split a bottle to see what it was like, here's the notes.

Nose - Raw wood, like a piece of oak charred in a BBQ and soaked in young, uninteresting whisky with the hope of making it taste better (yes, that doesn’t work very well). Musty like wet cardboard. Mouldy. And a rotten jackfruit like topnote. But behind this there is, somehow, something interesting - some sweet toffee. Serious digging though.

Body - Musty and rotten again, like mushrooms growing in the forest, and again that hopefully sweet cask behind it. Damn that's annoying.

Finish - The interesting sweetness persists. This may be the first whisky I've ever tried where the finish is significantly better than the nose and body!

What's not good about it - seriously flawed.

What's good about it - but I suppose, interesting and if they hadn't mucked it up it promises something interesting. Perhaps an attempt to save a dodgy bunch of casks with some better ones? Good money after bad.

Apparently aged for 15 years, then held in tanks for 5 (perhaps to await a market?) then back into barrels to finish.  1500 bottles. 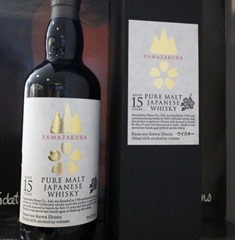 Nose - Sweet, restrained and slightly mushroomy (in a nice way). This is one of the most Scotchy whiskies in this set. Deep woody sweetness, toffee and Kendall mint cake and a top note of men's deodorant. A good "ordinary" nose - balanced and interesting with a clean, fruity sweetness and lots of fun to chase.

Body - Sweet with some raw barley and fennel seeds. A light, fizzing spice with fried chilli.

Finish - Medium with juicy citrus, good tannins and competent throughout.

What's not good about it - On first blush this is quite ordinary (although competent), and there's a bitterness which seems out of kilter if you're not paying too much attention.

What's good about it - But with time, really quite an insistent sweetness that throughout works well, and quite acidic like a heavily carbonated Belgian beer. And altogether very well put together (especially given its weird history) and a satisfying dram. In many ways it reminds me of why I like Cutty Sark; a kind of understated confidence and easy drinking balance.

Cosmo is the name of a mountain near the distillery. This is a blended malt made of "new regime" malt whisky from Mars and bulk imported Scotch malt. This was introduced this year and will be part of the core range (not just a one off bottling).

Nose - Sweet but elegant - immediately enjoyable with sweet green apple, a vague structural peat note and some lolly stick. Actually some of the lolly too - has a touch of frozen water about it. For a blended malt whisky with Scotch in it, this is very Japanese! Refreshing and very approachable.

Body - Complex and balanced, more of that peat that seems to be everywhere in small amounts, and a little fried chilli. Some sherry notes, fag ends and then bamboo furniture.

Finish - Long, competent and effortless, offering up vanilla pastry after all the structural wood and peat.

What's not good about it - Not much - it's a drammer for sure, one for glugging in front of a film or over a good conversation. So a little low on challenge but that's no bad thing. 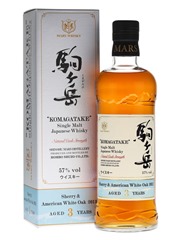 Body - Sharp and winey, fresh and tasty, almost shockingly but reassures at the last minute with lots of umami and tannins. A lot softer with water, but the youth shows a bit.

Finish - Long and quite saccharine cloying with lots of new oak. Pineapple cubes at the end (just like kola kubes, these don't really taste like pineapple anymore - neither does this, but it's that oily sweetness that I'm getting here).

What's not good about it - A little uneasy with itself, could do with further time in cask. Cloying is never good but this makes a good fist of it.

What's good about it - A lovely, complex and slightly exotic nose, ripe and fruity on the delivery. Seriously drinkable too.

An Enrico provided bonus at Bret’s Japanese mega-tasting session and the last whisky in this set of blog posts, this is the only Mars I’ve tried from the old regime!  I wanted to end on a high, and this is monumentally good. Unfortunately the review is a bit short when you take out all the swearing.

Body - old Islay dust! Perfect berries and fruit but (despite the funk) clean and balanced with refreshers and black tea?

What's not good about it: unattainable

What's good about it: Perfection. How is this possible in a 15yo? Dusty fruit, epic wood, perfect balance, very long and clean but interesting and so drinkable.

Speaking to Bret, these old regime Mars are invariably excellent, and given that there’s a lot more age on them it could mean amazing things are to come from the new regime distillery.  Mars is definitely one to watch.