Japanese whisky has been something of a blind spot for me for a while - almost intentionally (a so called “cultivated incompetency”). Like Irish whisky and rum I was trying to stay away from it in case "Scotch" happened to me again. Believe it or not, I used to work in my whisky room, back when it was called "The Study". Anyway the cat's definitely out of the bag now, although in truth last Christmas's Japanese blowout at SMWS really did that.

I don't need to tell you about the global excitement that accompanies Japanese whisky, and it hasn't helped having Jim Murray proclaim a relatively ordinary sherry cask from Yamazaki as whisky of the year 2015.  Consequently I have studied some whisky from Japan for you and can report that there’s definitely something in it.  I’ve tasted some absolutely spectacular whisky – heart stopping, mouth shutting, toe curlingly amazing - and at often quite tender ages.  How is this possible, and almost common in Japan when it’s altogether harder in other countries?  I’m beginning to suspect the answer is that a bit of everything is right.  Outturns are lower, and perhaps more care is taken in production (not that anyone in the Scotch industry I’ve met is anything but enormously proud of their art). Maybe some of those racial stereotypes about the Japanese being absolute perfectionists and taking massive pride in every little job might be in play?  Cask selection must be (from tasting this stuff) very high up the agenda with very few jobbing or poor casks being considered.  And finally, terroir has to be a factor.  You only have to look at the location of these distilleries to know that the environment has a major impact in the quality of the whisky. Hakushu (on the side of a mountain, in a forest) below, must have the most amazing air, water, light and atmosphere.  It also shouldn’t be a surprise if this has an effect on the attitude of the people making it, with direct benefits for the whisky.  As I’ve said before, I believe that attitude plays a part in making Islay whisky so good and I consider it to be a part of “terroir” almost as much as the physical environment. 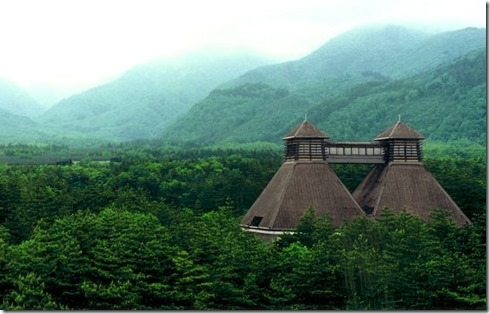 It’s not all incredible of course – there’s a lot of over the top sherry action which doesn’t always quite work, and things like a 26 year old SMWS Yoichi full term in virgin oak which is epic but slightly ridiculous.  And there’s some quite boring drams created in the name of highballs (although they can, of course, still be good, like the Hibiki Harmony). 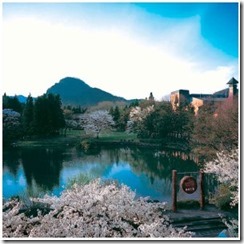 One of the observations I made early on in “researching” this post is that they can sometimes seem to lack soul compared to Scotch.  I think there’s a couple of factors at play here.  First the whisky I was drinking smells and tastes a lot more mature than the same aged Scotch would, but that accelerated maturation comes with reduced integration and complexity (as is my observation with bourbon).  Second, I just wasn’t acclimatised to Japanese whisky, and my experience with Scotch gave me a false feeling of comprehension.  The industry has many similarities to Scotch, after all it was setup in the early 1920s by Shinjiro Torii and Masataka Taketsuru after the latter studied in Glasgow and Campbeltown, but Scotland and Japan have diverged over the last century.  Just as American’s speak the same language as the English but you only have to visit America to release that it’s a very foreign country, the more you dig the more the similarities between Japanese and Scotch whisky seem skin deep.

Putting it another with with an analogy, consider Japanese food – the sweet, sour, salty elements are all there in balance, as they are in Western foods.  But the colours used to paint the picture are different; soy, kombu, rice wine, mirin, etc.  The result is a balanced and satisfying cuisine, but with a very different feel and experience.  It takes a little acclimatisation before you get it, but then you really get it.

The Scotch whisky industry is based on exchange of casks due to its long history of creating blended whisky.  Blended Scotch whisky is balanced and well integrated because the blender has access to whisky from all locations, styles of making and styles of still to create a balanced whole.  In Japan however, like with rum production, there’s no great tradition of swapping casks, so distilleries tend to have multiple types of still onsite producing different whisky styles in order to blend to make a balanced whole.  There are of course exceptions, for example Hibiki (a blended whisky made by Suntory) has casks from multiple distilleries.  But they’re all owned by a single company.  Contrast this with Famous Grouse, which is mostly whisky from Edrington owned distilleries, but also has whisky from other parties in it based on long standing exchange agreements, and North British grain distillery is only part owned by Edrington.  As a result, there is no real concept of distilleries being almost anonymous and the majority of the output “blended away”.  In Scotland many distilleries can count on long standing arrangements to have great tankers full of their three year old spirit dealt with, and with some distilleries that’s where all the whisky goes.  Having to have all the liquid stand up to scrutiny on its own or with other whisky from the same site must result in some greater care being taken.

There’s (significantly) fewer distilleries in Japan than Scotland so it’s easier to find your way around.  Two big companies, Suntory and Nikka, account for a big chunk of the output of Japan. 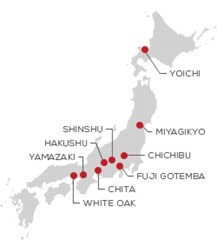 Suntory (of Beam-Suntory fame) own Yamazaki, Hakushu and the grain distillery Chita (in the “SunGrain” facility).  Hibiki is a blend of Suntory whiskies.  Suntory will be the subject of the next post.

Nikka own Yoichi and Miyakigyo.  All the Nikka whiskies are from these two distilleries. Nikka Coffey Malt and Grain are malt and grain whiskies distilled using the Coffey (continuous) stills at Miyagikyo.  Of course in Scotland, all grain whisky is distilled in continuous stills, and all malt whisky in pot stills as this is what the SWA (Scotch Whisky Association) dictate.  Nikka feel free to use the Coffey still to produce both malt and grain whisky.

Chichibu is new and owned by Ichiro Akuto whose grandfather used to own Hanyu (now closed).  There’s quite a few of these hitting the shelves in the UK as Chichibu, Akiro’s Malt or releases from the surviving stock from Hanyu (such as the Joker).

Mars is the name given to a whisky from a reasonably overlooked distillery called the Shinshu distillery, which is owned by the Hombo brewing company – it was mothballed for a bit then reopened so we’re starting to see whisky come in now from the “new regime”.  More Mars whisky is coming into the UK now and what I’ve tried has been rather good.

And some others you don’t see much of in the UK: Fuji-Gotemba is owned by Kirin (of the beer).  White Oak distillery is owned by Eigashima (a sake and shōchū brewer/distiller).  Fujikai is produced at Monde Shuzo distillery (traditionally a wine maker).  And the rest are closed – Karuizawa, Yamazakura, Hanyu, Kawasaki, etc.

In the course of my research, and in the notes that will follow, I’ve had a few bottles that were commercially available in the UK (although quite a while ago in some cases).  A few, however, have been sourced from Japan by Bret (aka Whisky Japan) and will be harder to track down; distillery only bottles, vattings and whisky blended by Osaka University students.  Apologies for that, but it gives you a feel for the much greater activity that’s happening on home soil.

Tomorrow, some whisky from Suntory.