While whisky is my greatest love now, Tequila was there first.  I didn’t round to attending TequilaFest last year – or more properly Tequila (and Mezcal) fest 2015.  This year it was held in Old Spitalfields market – literally in a roped off area in the middle of the market.  That was a bit weird.

On show were a small number of exhibitors – from the mass market tequilas like Olmeca and Don Julio, a great show of spirits arranged by Speciality Drinks (picture left) including Tapatio and Don Fulano, through to some very interesting Mezcals, particularly from Del Maguey (who were spoken of with great affection due to their contribution to Mezcal in the UK).

There was music and food, although I didn’t have any food because I lost my show money.  There was a lot of standing. 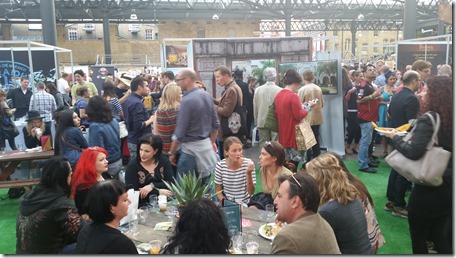 We did have quite a few interesting tequilas and mezcals though.  Our favourite was, weirdly the Tapatio Plato – great oils, very fresh and green and delicious to drink.

Don Fulano had a good range too, the blanco had great mouthfeel, lots of good oils again, and the cask strength version was more perfumed, bitter and aniseed.

The 1800 range seemed a bit ordinary – the Reposado was pretty boring and the Coconut infused tequila was actively unpleasant – cloyingly sweet, very artificial. I should have known when I saw they had a set of bottles with “art” labels (not those below) 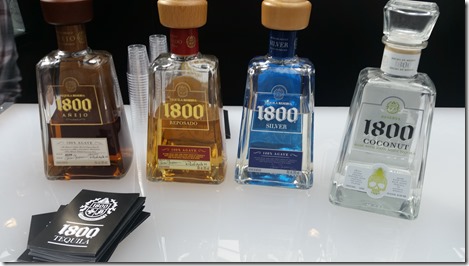 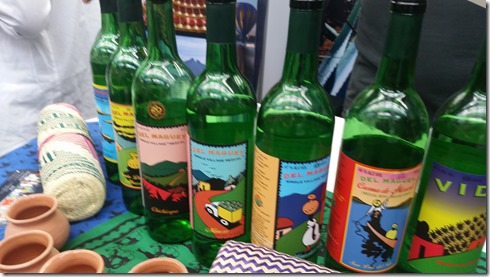 I’d tasted a few of these on the barrel top at the whisky exchange after work one day, and bought the Chichicapa, but there were a few new ones to me here, like the San Luis del Rio – sweet, fresh, lots of ozone and hard tobacco.

And the same but finished in first fill bourbon barrels – this was overly sweet for me – a clash of styles.

Another cracking mezcal was Derrumbes, and the Michoacan was up there with the Del Maguey – delicious, salty, very green and very intense.

I was really looking forward to tasting the Siete Misterios range again (having sampled two of them at the whisky exchange mezcal tasting years ago) but they were all gone by the time we got to them.  In fact, all of the interesting stuff was gone by about 7:30.

Apparently there were seminars and classes, but I couldn’t see any sign of them.  The food looked ok but not that interesting – we were expecting to feast but didn’t have any in the end.  Most upsetting though was that there wasn’t any water anywhere!  I’m not sure how you can run a spirits festival without water to hand everywhere.  The lowest ABV drink I was prepared to pay a fiver for was Mexican beer, and £5 seemed a bit steep for a 330ml can of Mexican ale.

So all in all, between the lack of water, the good stuff running out, some extremely drunk exhibitors and it all being very small, I think you could either call in charmingly unprofessional or I could admit that I’m a bit spoilt with things like Midlands Whisky Festival (held twice a year and about 4 times bigger than this) being the smallest I’ve been to.  We are, as my wife pointed out, lucky that whisky is such an institution in the UK and these other spirits have quite a way to go.  I’ll check back in 5 years or so and see if this grows.

Oh and another thing!  We arrived a little early in Shoreditch and wanted to pop to a pub before lunch.  At 12:30 in Old Street/Curtain Road/Liverpool Street on a blazing hot Saturday none of the pubs were open.  That’s just insane.  It was like being in another country.

Actually The Reliance was open – all the doors were open but all the lights were off and nobody was in there.