Do they realise how hard it is to write MP2 and not MP3?

This was the second Bruichladdich “own run” tweet tasting – I had the goods from the first one (reviewed here) but missed the tweet tasting itself.  What they weren’t, on paper, were good value for money.  But in the end they were fascinating and extremely good tasting whiskies, which is why their original format of 3x20cl was so good.  So I jumped at the second run of three unnamed single cask whiskies from Bruichladdich.

The tweet tasting itself was very different to the usual whisky wire thing, as it was run as a live video stream from Bruichladdich distillery hosted by new Head Distiller Adam Hanett.  We could add comments in the youtube site or within twitter, and I kind of did both, but it was a bit disjointed (for me) watching a presentation and then switching screens to Twitter.  My colleague Mark Newton at Malt-Review thinks it’s the way all tweet tastings should be run, but I just found it distracting.  But then I’m probably a bit more of an introvert.  I get loads of inspiring tasting notes out of the text based tastings!

Each of the three whiskies was tasted blind, and we found out what they were at the end.  Of course this is the best way to evaluate any liquid if you want to know if you love it for real.

2005, 10yo, organically grown barley – apparently the spirit was really creamy when distilled. 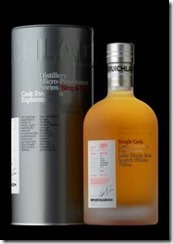 Nose – Typical... this is going to be really good isn't it. Sweet, bright berries, waxed fruit, lemon tart. Oak with clean earth, and coastal on exhale. Clearly bourbon cask (sweet, vanilla and toffeed), but crisply white wine too. Delicious, but with a top note of deodorant too.

Body - Rich, and thick in the mouth, beautifully winey but pretty soft and sulphured. Spicier with water, but lots more creamy fruit and malt. After some time, I get the bubblegum Adam is talking about.

This is a big, oaky, creamy, fecund whisky. Apparently this is young but it's delicious.

9 years old, first fill bourbon. Quadruple distilled, 89% into the cask. Once I knew this, I could feel the rum!  It was especially interesting to try this as I tried X4+3 blind too a long time ago at a whisky squad tasting and very much enjoyed that too. 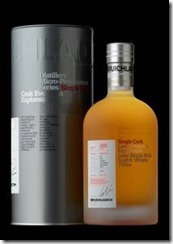 Nose - Elegant, but quite hard blonde oak. It's more complex and restrained than the 149, and with time, it's harder. It's a lovely whisky though, the very definition of good, boring bourbon cask laddie - hard barley. With water, lovely oak on the nose.

Finish - Fresh, clean fruit - apple and glace cherry. Lots of bitterness at the end… beautifully made stuff though. 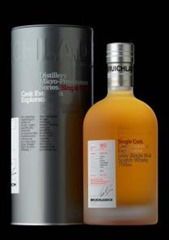 Finish - Long and delicious. Sweet and ripe, thick and soft. Tannic at the end. The general feel of this whisky is that it's extremely high quality, but again this is a tasting rather than a drinking whisky.

I highly recommend the Laddie TTs - £90 for 3x20cl is a bit steep but they’re well presented and extremely interesting whiskies that you wouldn’t necessarily want a whole bottle of anyway.