Three sherried sisters for The Whisky Exchange by Signatory in July 2015, with handsome green labels and lots of colour in the whisky. 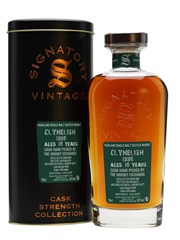 Nose - Sherried. At first, just bright red berries, lots of spicy wine and a little musk. Not too complicated either, reminds me a great deal of Cutty Sark (which I do enjoy). Underneath, a lot more complexity with sweet oak, Sauternes, tart cherry and scented erasers - and a bit of buttered crumpets. Then Turkish Delight - quite clearly. It really is very sherried though – nicely done, but almost drowning in sherry (like the TWE Balblair was a bit – this is pretty similar).

Finish - Then bitter like a dark cherry beer.  Lots of fence panel and a little fountain pen ink.

What's not good about it - It's quite oddly half one dimensional and half complex. That’s the spirit fighting with the heavy sherrying.  And the bitterness in the delivery is at odds with those ripe sherry tones.

What's good about it - I love the sour cherry and Turkish Delight. And that dark, musky, sweet nose is very compelling even if the old wood borders on stale.

This is a quite odd, slightly awkward if nicely sherried whisky. I'm not quite sure what to make of it, although the nose and initial delivery is very good. I'm not rushing to buy a bottle though. 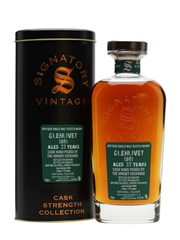 Nose - Deep, dark and elegantly red, like 80s glace cherries. Mango juice, old permanent markers and raisins soaked in Jack Daniels - dusty, sweet and oaky. Red fruit!  Raspberries!  That's all, though, folks. It's screaming "I'm an old whisky from an excellent cask", and you can't really argue too hard with that. I'm reminded a bit of the Cadenheads Tomatin 35 although that had bigger balls and sexier fruit (and was significantly greater). With water, almost medicinally sweet, with cough sweets.

Body - Luxurious. Very polite, deeply sweet but with lots of black oak, blackcurrant jam and some burnt toast.  At the end of the delivery, intensely winey and finally some good structure – spicy, dusty wood.

What's not good about it - Probably just a hair too far into structureless alcho-jazz (given the price and expectations).

What's good about it - But a big, old, important fruit bomb nose, no doubt about that. And pure luxury on the delivery, with a long, sweet, oily, fruity finish. 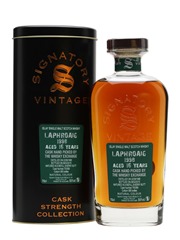 Nose - Doesn't disappoint. I'm transported back to one of my first cigarettes - intoxicating, complex, very adult but very sweet. Dark cereal, Germolene in a slightly sweaty bandage, hard icing and low, sweet sherry wood. Glorious TCP and gunpowder, finally. Thank god - have they stopped making Laphroaig like this or have they just stopped handing out the casks to IBs (as constantly threatened)? Meaty.

Finish - Long, dustily numbing and bitter. Complex and so bitter it's probably good for you. That's balanced by intense sweetness, juicy fruits and deep sherry. If this wasn’t a family blog I’d swear, right about now.

What's good about it - But assuming you do: This is the antithesis of the polite, "select", tidy Laphroaigs I've been banging on about just very recently. Not only is it unruly, juicy and massive, but it's balanced, artisanal and complete. And it's not as harsh as that 15 year old from last time. Shame it's £20 more but that's life, inflation and market forces.

Now, bear in mind that I told you about the 15yo Signatory Laphroaig for TWE ages before it won awards and sold out and none of you listened.  This is currently in stock, and it’s even on a multibuy offer that takes it to £105.  So while I realise that £120 is too much for a 16 year old Laphroaig, I urge you to (as I have) make hay while the sun shines.