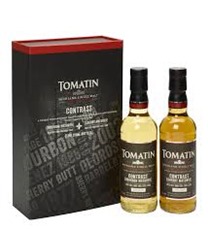 Continuing on their path of being super cool, Tomatin are about to release a pair of vatted single malts that aim to contrast the difference between ex-bourbon and ex-sherry cask maturation. They’re sold as a pack with two half bottles each containing sherry/bourbon casks from 1973 (42 years old?), 1977, 1988, 1991, 2002 and 2006 (9 years old?). I can't really think of a release I could ask more from.

And yes, I know I tend to be a bit gushy about Tomatin…  but honestly, this stuff is awesome.  Is Graham Eunson a genius or does he just have an amazing and very large back catalog of casks to choose from?  Please continue to release interesting/nerd whiskies and big multi-decade vattings that are beautiful to drink Tomatin!  Definitely the brilliant side of NAS.

EDIT the two vattings contain the following numbers of casks of each vintage – remembering that bourbon barrels (195 litres) and hogsheads (250 litres) are smaller than sherry butts (500 litres), but that the rate of evaporation and amount in each cask will have been different.  And then everything diluted down to 46%.

Nose - Reasonably glorious. Sweet and deep, musky, waxy cask. Barley sugar, candied orange peel, lime marmalade and fruit polos - remember them?! Tomatin's such a grown up whisky - structured and bold when young, a massive fruit bomb (but still Scotch) when old, and I just love them vatted up through the years, like Decades - that was fabulous too. Weirdly, this really takes me back - nostalgic on the nose? Lots of perfume, anyway.

Finish - Medium long, with more tobacco, matchsticks, chocolate and plenty of oils. Perhaps a little bitter at the end.

What's not good about it - A duff note with that bitterness. Also, they don't sell it in big enough bottles.

Nose - For some reason I was expecting a bomb. The colour isn't bomb though and neither is the nose, and I am much relieved. More candle wax, but even duskier than the bourbon. More boiled sweets, more beautiful old cask, but with orange juice and candied peel.  Earthier - dunnagey even. Some curry powder and soft liquorice too. Comparing them, the nose on the bourbon is more metallic and brighter, sharper - actually it's sweeter. God, they're both beautiful on the nose.

What's not good about it - Nothing. Now I know they're both beautiful, two packs of half bottles suits me fine.

What's good about it - A fabulous, old nose that's not past its prime. Perfectly poised wine influence, lots of balancing structure. A very long finish that doesn't put a foot wrong. Superb.

Thanks to Tomatin for the samples!