You wait ages for a new Laphroaig and then three show up at once!

Let's do these in reverse order, I don't want to have the gentlest and best last, and after the 10 year old cask strength!

Nose - So gentle and so much fruit juice. Dusty old Islay, as is expected, and gentle, fruity and blendedly balanced, also as expected. An echo of peat - old, fruity and medicinally clean. An echo of the sun-baked coast - ozone, salt and sand. Everything you hoped for.

What's not good about it - It's quite dry, quite ashy behind the fruit, but otherwise nothing really. Unless you're not up for complexity. Not exactly a drammer!

What's good about it - This is one of the most obviously beautiful whiskies I've ever tried - elegant and balanced, and delicious. A fantastic nose, interesting and compelling but luxurious and delicious on the delivery and a rollercoaster finish, with no let-up of balance. Expensive but worth it. 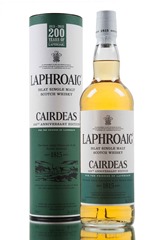 Body - Cherry, wet varnish, oil paints and wood. Crayon and WD40 (apparently you can cook with WD40). Oily, tarry and agave, like a dirty mezcal.

Finish - Juicy, boiled sweets, whitebait and the old, burnt petrol and oil of a small engine kept in a shed (lawnmower, strimmer, whatever). Water lengthens the finish and intensifies it. Really, really drinkable.

What's not good about it - Verging on mezcal, this is quite an intense, astringent and young whisky for one so balanced and compelling.

What's good about it - Old school. If, like me, Laphroaig is what flipped the bit for you with whisky, this'll work for you.

They've got some good scalability with that numbering system. It'll be a good millennium before that runs out. I wonder, if there are any humans around then, if we'll still have whisky or Laphroaig and what will it be like? This'd be worth a fortune. Drink up! 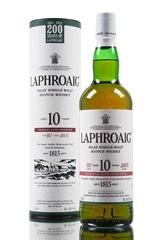 What's not good about it - If you don't like fetid and heavily peated, the superb balance, Asian fruit and intensity won't save it for you.

What's good about it - Classic, heavily peated and medicinal Laphroaig on the nose, follows through. What a whisky.

Thanks Jon for sorting out shares in those three.  Let’s round things out with one of the many SMWS Laphroaigs we’ve had show up since the sale of the society.

Thanks to Chris for a share in this.  This was supposed to be in the May outturn but got swapped out with the 29.162.  Murky and almost completely colourless, this is a weird one. 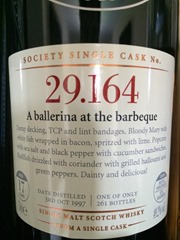 Nose - Sweet and sour, musky and with a real BBQ pork thing going on - pig candy. Lots of cereal and very sweet. For some reason I'm thinking of Laphroaig Select. With water, oaked chardonnay behind that peat and a lot more interesting - swiney still.

Finish - One dimensionally peated. Clean. Quite long though, sweet through to the end.

What's not good about it - This is the most straight laced (and professional) but boring SMWS Laphroaig I've ever tasted.

What's good about it - As a general fan of pork I appreciate the swiney element but that might be a turnoff for you. Overall this is a real disappointment though (but you set your expectations high when you open an SMWS Laphroaig).