My initial reaction on tasting the new, 200th anniversary edition of the Laphroaig 15 was “god, this is good”.  But I know what I’m like, I wanted to like it and I was afraid I had my rose tinted nose spectacles on.  A blind tasting is the only way to determine if you’re swayed by the romance of the whole thing or genuinely love the liquid.

So I set this one up – it was going to be the 15, Select, Quarter and Triple but I appear to have finished my sample of Triple so I replaced it with the PX cask.  The results were… both successful and unsuccessful.  A success in that I have proved to my own satisfaction that yes, the 15 is clearly superior and I do honestly like it a lot.  But unsuccessful in that it was pretty obvious to me which was which – the PX was obviously PX, the Select, obviously young.  Then the very good, and good but a bit rough round the edges could only really be the 15 and Quarter Cask respectively.

Anyway, in summary, yes the new Laphroaig 15 is great.  All tasting notes below tasted blind, and all guessed correctly (and almost immediately).  I’ve downgraded the Select, I guess I wanted to like that too.

A Laphroaig Select, B+ 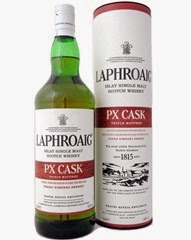 Finish - Medium, spicy hot at the back of the throat, a suggestion of waxed wood near the end and a touch of orange juice. But very hot and petrol at the end.

Quite a lovely nose, good herbal spice in the delivery but a broken, unbalanced finished.

Body - Ripe, sweet, funky with some menthol cigarettes and candle wax. Quite spicy actually, but fresh and delicious.

Nose - Lighter, but obviously higher quality than A and B. Clean, sweet cereal and peat, cut orange. Delicious.

Body - Initially rich, ripe and well peated but then some spice and tobacco.

Finish - Long, comes in waves of juicy and raw cereal. Troubled, but a lovely nose.

Email ThisBlogThis!Share to TwitterShare to FacebookShare to Pinterest
Labels: Laphroaig