I do enjoy the single cask outturns from Wemyss - it's relaxing to get some single cask gear at 46% sometimes (what's the average at SMWS? 55%?) and some of them are dangerously, unstoppably drinkable.

The March outturn for Wemyss is out, but you need to be quick as they have about 10 bottles of each for the UK it seems. I tried the new Bowmore ("The Rockpool") at Whisky Live London and very much enjoyed it.

Thanks to Wemyss for some samples of the others from this outturn! 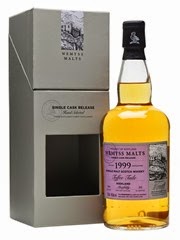 What's not good about it - Very little.

What's good about it - A compellingly sweet, but balanced nose, followed by a very grown up, complex and masculine delivery. I could drink this all night. Buy now!

This is from a sherry butt which produced 730 bottles so should hang around a little longer than the others. I've never met a whisky that shouted Chinese Supermarket as loudly as this! 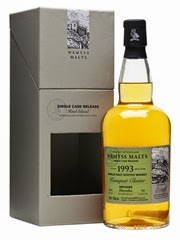 Nose - Absolutely filthy. Hoisin sauce, Asian fruit (presumably kumquat, I need to study these fruits a bit harder), sweetly sour and overripe, almost rotten with a top note of white flowers. And I say all that in the best possible way - this is dirty, sexy whisky, and very challenging.. And very good.

Finish - Medium, oily with a touch of spice. Dry but fruity and still naughty. Good stuff.

What's not good about it - Challenging and almost unbearably dirty. What happened with this cask? Something early on which came good after a couple of decades in wood perhaps.

What's good about it - Very complex, fruity, sexy and drinkable. It reminds me of the Lady of the Glen Ben Nevis with the weirdness but has all the DNA of Glenrothes behind it. A remarkable whisky. 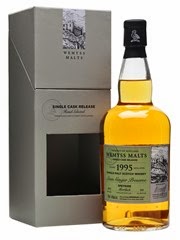 Nose - Sweet and dark, polished glass and Drambuie. Much easier going than the last two, with toffee pennies, copper pennies and toasted coconut. Almonds, waxed wood and black cherry. The longer you spend with it the deeper, warmer and more introspective it becomes.

Body - Warm and gentle, waxy and deep, very oily with grapes and sulphur, and a little top note of menthol and mineral. Impressive balance and a really considered delivery.

Finish - Medium, incredibly poised with lemon toffee and a touch of grapefruit juice at the end. Lingering, balancing sulphur and tannins against the warm sugar. Where's the ginger though?

What's not good about it - I can't think of anything.

What's good about it - Complex and warm, changeable and delicious. Fabulous.