I toured The London Distillery Company last year with a bunch of other whisky bloggers, before Whisky Live London, met Darren Rook, co-founder, and saw the kit - various liquids being pumped noisily between large stainless steel vessels, and blue plastic kegs full of test spirit. The site is an old Victorian dairy cold room near Chelsea, London. The windows were bricked up then, to save on window tax (a tax on the number of windows in a property in the 18th and 19th centuries - hence the term "daylight robbery"), and during its refurbishment, the London Distillery knocked them through again with the addition of period style windows made in Liverpool.

Inside it's very compact for a whisky distillery, imagine yellow brick with a central white enamelled brick band, the space dominated by their lauter tun, fermenters, copper stills and a mix of pipes. They have two stills; a small 140 litre copper alembic, ‘Christina’, for producing the base of their Dodd's Gin (gin is produced by macerating neutral grain spirit with flavourings and then redistilling it), a laboratory Rotary Evaporator (a small glass still that works at low temperature under vacuum) for experiments and producing the top note component of Dodd's, and a 650 litre copper pot still with a detachable side column. The side column contains five plates, each of which can be set in different positions to produce a different output, which gives the distillery team a lot of freedom to create different spirits.

When producing single malt they detach the column completely, reattaching it for rye production. However, if the team decided to make single malt spirit with the column attached and plates plates closed, increased reflux means that they’d produce a stronger, cleaner more floral spirit . This flexibility is banned by the Scotch Whisky Association (SWA) – Scotch single malt whisky must be produced in a pot still, distilling wash from malted barley only.  But the London distillery aren't constrained by the SWA, and they’re experimenting with all combinations of the still, grain and yeast to produce interesting spirits. It’s a small operation though - their main still and other fermentation equipment can only produce enough spirit for a single cask each time a batch is made.

I met Darren a few weeks ago at the SMWS bar on Greville street (where he used to be the venue manager and continues to be an ambassador), and he had some plain British malt and 100% rye spirits (new make) with him.  One of these had come off the still that afternoon, another was some rye spirit that had been in cask for 3 months.  I got to chat to him and try the spirits. They’re very good pre-maturation and I can see why they’re thinking of marketing the rye as a cocktail or white spirit in it's own right.

The early mission of the distillery is to explore heritage and high quality single cask whisky. While we are seeing a few distilleries starting to release whisky with "craft" grains (recently Arran's Bere Barley and Glenmorangie's Tusail with Maris Otter), Darren is primarily experimenting with specific yeasts to produce different flavours in the wash and hence the spirit, making use of the national yeast library to retrieve heritage brewer's and distiller's varieties. Of course, barley makes a big difference to the spirit too, and he's been building relationships with English grain producers, such as Warminster Maltings, to get access to barley which correlates with the heritage of each of the yeasts they’re testing. 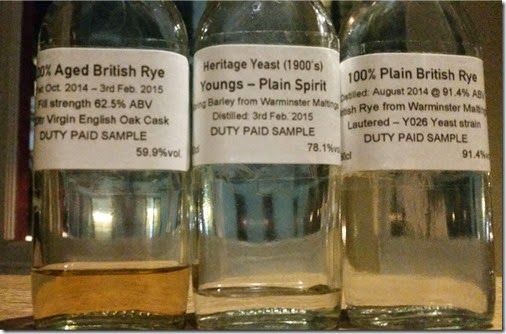 Because of this focus, each time I’ve met Darren, we’ve spend some time talking about my amateur efforts brewing beer at home.  Homebrew really drives home to me the marked differences malt and yeast make to the wash (called beer when I make it of course). I know that Belgian beer tastes as it does because of the components in the grist and most importantly, the type of yeast. For example, yeast is responsible for some of the seriously orangey notes in one of their experimental spirits, with a variety aptly names ‘Orange Esters’ (although this won’t be make it into the final whisky as this isn’t the direction Darren wants to take their final, consistent single malt).

Their attitude toward production reminds me in some ways of homebrewers - less about yield, more about quality, more about learning the craft whilst doing something different and trying things out. I'll happily stick half a kilo of expensive hops in a 25 litre batch of beer because I want to see how much hop flavour I can get in there (in the boil, whirlpooling them in in steps as the wort cools, through a hopback into the fermenter, then dry hopping), because I like hops and because I can, and it's fun.  I don't think Darren would hold back from using malts that cost twice as much, or using more of them, or treating them in a different way, if he thought the end result would be interesting and/or great. And we've both got to live with the results for a while (me drinking it, him maturing and selling it).

Tasting these, there's some flavours I've always assumed were cask driven coming through. While we're seeing different malts making a difference to commercial whiskies being released, and some the results of some experiments coming through (a recently Cooley from SMWS - 117.5 – apparently used crystal malt), I'm yet to hear of anyone really using anything but distillers yeast (powerful, alcohol resistant and fast). Over the next decade, assuming it can keep the business model working, we're going to see some seriously interesting spirits coming out of the London Distillery.

This is distilled using two plates on the column, and made with 100% rye when usually you'd have at least 80/20 rye to barley in the mash bill. Rye whisky is usually made by boiling the hell out of the grist and then fermenting the whole lot, grain and all. This is instead produced like a single malt - so after mashing, it’s lautered, crash cooled, then fermented off the grains using an old brewers yeast. It's then run through two distillations, the second one uses the plates on the column (these aren't used for the distillery's single malt).

Body - Intense lacquer and wax, with a lot of water, orange oils and pink grapefruit.

This is the above spirit, diluted down to 62.5%, then racked into 100% virgin English oak casks with a medium char (these are made by Alistair Simms, the last British master cooper).

This is the “Testbed2" spirit 3 months in. After three years in this oak, they'll fill these casks with English single malt to make a unique English Single malt Whisky.

Nose - Clean, soapy, sweetcorny, quite delicious on the nose.

This was fermented with Youngs (brewery) yeast strain, from the national yeast library.  It uses the organic Quench barley variety (and a lager malting process) which makes it much more oaty - I tasted the raw malt and it's very edible, but the Maris Otter he's using is much more tasty raw.

Nose - Beautiful new make - like fresh crushed malted barley. Orange, cake and icing. Actually quite waxy - I always thought that was from the cask? Maybe it's to do with the yeast.