A new NAS Glenrothes, which launches about now in Taiwan only and should be with us in the UK some time in 2015, which is a shame as I’d definitely recommend this as a xmas dram.  It’s NAS but the casks involved have been specified in the press release (but not on the label).  Here’s the info from the press release:

It’ll be on sale in Taiwan now and will launch in the UK in the new year at £39.95, and will be available from Berry Bros. and Rudd.

The Glenrothes Vintage Reserve, 40% A+ 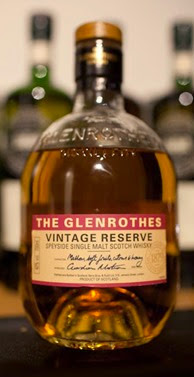 Nose – I do like mixed decade blends of casks – you get depth and complexity as well as vigour. This has that going on with light waxy wood, very juicy, lots of cereal (quite Mortlach-y in some ways) and zesty musk. Soap, cobblestones and orange juice, some toasty and honey, and some very malty (but not out of balance) new make.

Body – Juicy – lots of orange juice and clementine.  Quite xmassy, even down to the xmas tree pine notes.

Finish – Quite long, a little fizzy, lots of orange zest and some love hearts.

What’s not good about it – Feels young when the bottle’s opened, takes a while to open up.  Give it time.

What’s good about it – An excellent single malt at this price point, and I don’t really care about the NAS thing so long as the whisky works.  Love the orange juice and zest and could drink this all night.  A great one for sipping over the course of a film – not too strong, doesn’t need diluted down and lots to get into while your eyes have something else to do!

Another thing that’s very satisfying about this whisky, of course, is the bottle.  Packaging does make a difference!

Thanks to Glenrothes for the bottle.