Cu Bocan is Tomatin’s NAS, lightly peated single malt, reviewed here some time ago.  This is lightly peated Tomatin spirit in a blend of virgin oak, sherry and bourbon casks.  With the Cuatro sherry finishes Tomatin have also released a sherry only Cu Bocan.  This is a limited edition run of 6000 bottles and matured in first fill sherry butts (like the Cuatro). 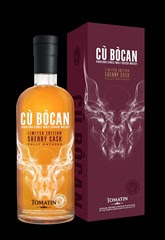 Nose - Plums and peat, gentle warm spice on the nose - cinnamon and allspice.  Toffee and toasted wood.  Lightly musky with a little crayon.  The sherry is both bold and restrained somehow, the sweetness rides over the top very nicely.

Finish - Medium/short with chilli, and tropical notes at the end.  A bit like I’d expect a tiny pineapple rolled in chilli and other spices to taste like. Weirdly Christmassy in a summery way.

What’s not good about it - The finish is a little short, the numbing is a little unexpected given the rest of it but that kind of adds to the kookiness of this rather beguiling whisky.

What’s good about it - Warm spices, flawless sherry, that odd combination of peat and Tomatin comes together very well.  I didn’t expect to like this as much as I do, on the list.

Thanks to Tomatin for the official sample.