Back in February I attended a Glenfarclas masterclass, led by George Grant, at the Whisky Exchange in London Bridge.  It was, of course, epic – my write up is here, and while it did get a bit tricky writing notes and comparing 7 amazing, ancient but rather similar Glenfarclas whiskies, I kind of managed it.  At the tasting we tried the 1979 Family Cask Release X, which (despite being 300 quid or so and off the back of a load of other amazing sherry monsters) was so good me and my mates organised an impromptu three way split and I came away with 17.5cl of ‘79 hooch.

At the tasting, George Grant told us about an imminent release of a 60 year old Glenfarclas – six decades, hexagonal case, 60 bottles in 6 markets.  Sadly, I am not in possession of a sample of this whisky, let alone a bottle, but it has definitely now been released (and is still available, for example here at Green Welly).  In honour of this amazing feat (creating 360 bottles of whisky a lifetime after distillation) I thought a couple of big hitting Glenfarclas’s would be in order, so here goes.  The first is the remnants of that ‘79 we split at TWE (reviewed before but again here now, in the calm of my own study), the second is a sample of the 1969 Family Casks that was given to me, very generously, by Franck Debernardi of La Cave de Cobalt.  The first, a mere 30-something years old shows highly matured whisky at its best.  The second, at 40 years old, gives an intense, almost surreal experience which is nothing like the “standard” Glenfarclas 40, and shows how challenging and exciting really old whisky can be.  I would love to experience the 60, and doubt I ever will, but at the time of writing it’s still available to buy. 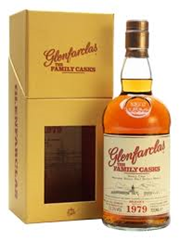 Body - Slightly sharper and spicier than expected, beautiful backnotes of furniture polish. cherry tobacco and sharpies.  Lots of structure, actually quite bitter behind the chocolate cherries and wax.  And sherry – salty, fino sherry and tapas (by association).  Wonderful.

Finish - Long, oily, waxy, balanced and intense.  Really intense furniture shop lacquer and beeswax.  The delivery is incredibly fabulous even given the incredible nose (i.e. it doesn’t let you down).  Water brings out a little more wood bitterness and some cream eclairs - but it’s better without it.  What a belter – Franck, I’m saving you a dram.

The colour on this is ridiculous, practically a black whisky this is the colour of molasses let down with a little prune juice. 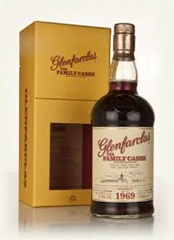 Nose - Dark prune juice, raisins soaked in scotch, clear, bright orange marmalade mixed with dark, thick cut marmalade.  Red strawberry bootlace sweets, ripe, cut figs and glace cherries.  But this dark juicy sweetness is all balanced by an initially unprepossessing savoury and all consuming fist of mature wood: antique furniture, leather armchair, black oak beams, and bright, zesty freshly cut wood dust.  Vibrant in the same way that 100 year old Victorian floorboards are when they’re cut in 2014.  As well as this, herbal and green notes - cut green pepper, white grape skin, cut runner beans.  And in time, some of that vegetal sulphur from the cask comes through, like a beauty mark.  But still the juicy, black fruit dominates.  The addition of water turns on an unexpected belt of tropical fruit, fruit salad chews, and turns the whisky milky.

Body – Wow.  Initially like sipping neat something - I think its pomegranate cordial, but it has a big tamarind thing going on too.  Dark, but intensely bright, quite incredibly oaky, and a little wood sour.   A moment of intense strawberry.  Then musky like a Madiran wine, like barn owl shit.  Then almost BBQed levels of wood, like BBQ toasted oak staves soaked into the whisky.  Extraordinarily intense.  Water brings the waxiness through a little and some tropical notes and tones down the bitterness.  Once used to this, I add water, which turns the delivery into milky too- creamier and softer and quite, quite odd.  Like treacle and toasted wood staves let down with milk.

Finish - Incredibly winey, a really South West France thing going on and on. Oily and tannic, and lingering, intense citrus Sichuan peppercorns.  What remains, for some minutes, is intense, numbing wood sour - with striking grapefruit, orange zest and chewed wood.  The whisky leaves lots of residue on the glass as it dries - the cask had a lot to say over 40 years!  After some 10 minutes or so, that vegetal note comes back to haunt us.  In fact, as you build up tasting this whisky, that sulphur sticks with you and lingers retronasally.  If this whisky wasn’t so completely unhinged I’d call it a fault - here it’s part of the curiosity.