This smasher was released by the Whisky Exchange to celebrate their anniversary of being 15 years old (online), and ahead of the Whisky Show 2014.  Distilled in 2000 and bottled in 2014, it spent the whole time in a first fill sherry cask, and is almost pitch black/ruby in colour.  It’s expensive for a 14 year old single cask Balblair but definitely worth it in my opinion. 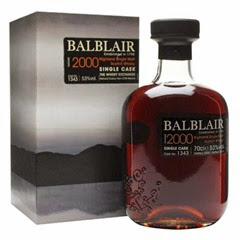 Nose - Intense, ripe, juicy black cherries, new leatherette and a freshly opened bag of raisins. A mineral edge - chalk and granite, and some very faint lactic notes. Some menthol if you really poke around.  The colour on this whisky is ridiculous, which did give me a fear of over sherrying and it being too soft, cereal and dusty.  14 years in a first fill Spanish oak ex-sherry butt has given it the intensity but it’s retained the structure too.  Oak, toffee, some sour plums, rich spice (cumin, turmeric) and fruit and nut bar balance the intense sherry and the whole thing is balanced and integrated.  Given the last couple of Kilchomans (young in Port or finished briefly in PX), the integration on the nose is much more apparent.  With water, more grapes and fresh sherry come through - this becomes so much more christmassy, with Christmas pudding and flaming rum, Christmas cake with marzipan and rock hard icing, and perhaps a cheese board with opaque, intense Port.

Body - Christmas spices and a some chilli heat.  Quite bitter cherry.  With water, lots of chocolate cherry and chocolate liqueurs.

Finish - Long and numbing, dark and oaked.  Seville oranges, chocolate orange and some cloves.  Balanced and ripe, with loads of structure and interest.  With water, the bitterness is amplified and more tropical fruits come through on top, but they’re unbalanced by the bitterness.

What’s not good about it - It’s perhaps one of the most sherried malts I’ve ever tasted, which could be an issue. The bitterness near the end (and particularly with water) could be a challenge for you.  The structure could also be a challenge also if you’re after soft sherry character...

What’s good about it - But I’m not.  I love intensity and love sherried whisky to have a backbone.  The sherry is faultless, thankfully, given it’s intensity.  Nothing out of kilter in terms of sulphur and epic fruit and balance.  Quite the blockbuster, good pick team!