I won’t reiterate the back story about yeast cultures in space or whatever it was – this is another special release from Ardbeg (hot on the heels of Auriverdes and Kidalton 2014), and this time it’s very Ardbeg.  Supernova was a super (for the time) heavily peated expression originally released in 2009 to the committee and then a little more widely, then 2010 and now in 2014.  I was going to save these notes for an Islay special that’s been accruing due to everyone but me visiting Islay recently and shipping me back bottles and samples.  But as this is coming out to Ardbeg “embassies” tomorrow (Royal Mile Whiskies and TWE come to mind), I thought it’d be jolly to post it tonight.  Enjoy! 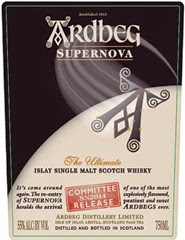 Nose – Golden Ardbeg; sweet, sour peat, ripe pear, perfume.  Sandalwood, liquorice allsorts, charred oak and some pine.  Tiny lemon boiled sweets (we really need some kind of way of finding out what sweets are called when you only have a vague taste recollection from 30 years ago).  Sherbet dib-dabs.  With water, some more of the sweet shop, some maternity ward – the peat retreats – and there’s some silly putty too.  Lovely.  There’s a lot of digging to be done here.

Body – Spicy, ashen, then lemon sweet toffee and tar from smoked fags (in that kind of earthy, satisfying, done a hard days work kind of way other ex-smokers may recognise).  There’s a musky lemon and almost fungus edge to that, quite strange.  With water, more of the dried chilli comes through, and less of the musky, and some salt and vinegar.  Salted caramel – it’s all salted caramel once you notice it and really someone should make a salted caramel laced with Corryvreckan on the basis of this.  Retains it’s character and intensity throughout.

Finish – Long, lemon fizzing and Sichuan peppercorns.  Toffee with hazelnuts in.  Very salty and oily, very oily – more so with water too.  Lots of body and character.

What’s not good about it – Musky and awkward in some ways without being totally amazing.  50% over priced.

What’s good about it – But the whisky itself is exactly what I want from an Ardbeg special edition (and what’s so lacking in the new Kidalton) – unmistakeable Ardbeg character with at least some of the knobs turned up to 11, loads of character throughout, loads of body, oil and peat

Thanks to Ardbeg for the official sample (not in a miniature, thank goodness) and thanks for gravity for its small part in the proceedings, whatever it turns out they were.  Good luck scoring one tomorrow!