Here’s some blends produced by Springbank, including (one assumes), a large quantity of Springbank single malt, but also other stuff (grain of course, and other malts).  They’re both great, particularly the Campbeltown Loch, but the Springbank CV really stands out now as a total bargain. 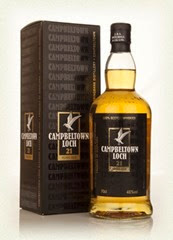 Nose - Glorious sweet, sappy bourbon intensity.  Brightly waxed, with intriguing blonde wood notes and a background of tobacco and engine oil.  A real carpenters workshop behind this, right down to the pencil shavings.  Rather epic.

What’s not good about it - Nothing - this is a fabulous blend.  40% Girvan and 60% single malt, this displays the usual excellence from the producers.

What’s good about it - Trademark complexity, touching sweet, sour, salt and smoke on the nose.  No let up in excellence in the delivery.

Thanks to Johnnie Stumbler for the sample! 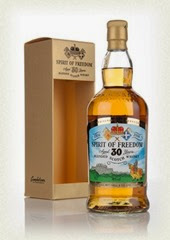 Body - The initial delivery is slightly disappointing given the nose.  A little sour and smokier than expected, without the intensity I was expecting.  Spicy wood and juicy tobacco leaf, some apple and bitter liquorice stick.

Finish - Deep toffee offsetting the spicy sour notes.  Quite long, balanced but lacking some midrange.  Ultimately unbalanced as the bitterness and sweetness fall out of favour.

What’s not good about it - Lack of midrange near the end of delivery and a bit of harsh landing.

What’s good about it - Fabulous nose, loads of intrigue and opulence, tobacco and hashish.  Much of the delivery is spicy, excellent and moreish.  Just falls down a bit at the end.  An interesting antidote to the NAS debate, as it’s heavily age statemented but probably is correctly priced at about £70.  For the same money, the 15 year old Springbank single malt is half the age and much better.

Compared to the Campbeltown Loch 21: n- the 30 is more masculine, aftershave and wood, where the 21 is fruitier with more wax (although both are waxy, the 30 is more crayons).  I prefer the nose on the 30 but there’s not much in it.  b- the 30 is more austere, sourer and a little thinner.  The 21 has much more intensity, a longer development and a beautiful landing.

Compared to the Springbank CV: n- not much comparison here, they are very different.  The CV makes the 30 smell overly weak and icing sugary, but the 30 makes the CV smell like a Diageo special release.  It’s wonderful.  b- compared directly, the difference on the body is less marked in the initial delivery but the CV takes over later on, with long, long drying notes of sulphur and lots of complexity.