OK now I’m hooked.  Right then OB range, let’s be having you.

A NAS Springbank, discontinued I think but available from Arkwrights at the time of writing, and something of a bargain too at £35. 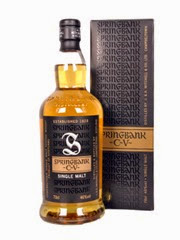 Body - Oily again, more robust with coastal edges.  Perhaps more obviously sweet with icing sugar in the delivery than the some of the others.

Finish - Long, bitter engine oil and peat notes, well balanced just straying into one-dimensionality in the very end.  And a little overbalanced into oily versus structure and wood at the end.  Goodness me for this money though, they can do no wrong.

What’s not good about it - Icing sugar and lack of complexity at the end?

What’s good about it - Everything else punches in the 80-100 quid bracket - wow what a whisky! 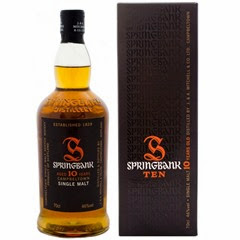 Body - Toffee, sulphur and balancing peat, a little thin although topped and tailed by interest (sweet toffee, sulphur and peat) and complexity (wood, coastal and red berries).  Lacking midrange near the end but plenty of substance initially.

Finish - Long, peat coming through against the sulphur, eventually straying into watery wood bitterness a little.

What’s not good about it - Midrange, a little thin compared to its siblings.

What’s good about it - Expensive feel on the top and bottom for the money - although I prefer the CV. 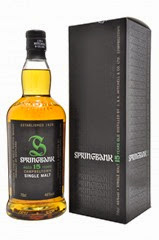 Nose - Darkly waxed, a little vegetal (carrots), dark toffee, balsa wood and PVA glue.  Some minerality.  Apples and engine oil, pears and pine.  Trainers and tarmac.  It’s all pretty complicated, poised and of course, perfectly balanced and rather exciting.  The empty glass (and I guess the full glass) has this kebab shop air to it (not in a bad way) of pickled chilles and meat.  This has the most sulphur of all so far, and it’s so perfectly pitched.I think it’s just wonderful.

Body - Peat and sherry, but encased in toffee and oak.  I guess that’s whisky for you, but it’s so beautifully expressed here.

What’s not good about it - Nothing... actually... perhaps the wood in the final, final moments strays into bitterness a little far.

What’s good about it - Long, great complexity.  Enormous balanced sherry notes and wood backing.  Intense, balanced and a long finish.  Not much else to ask for. 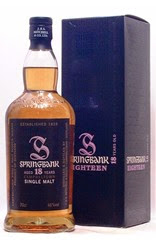 Nose - Restrained, a little more classical, but still has that darkly understated tropicality the other malts have.  Wax, ripe pear, a hint of cherry and that beautiful balanced peat that Springbanks have.  I love the way the range are all such great blends of sherry, bourbon and peat.  The results are beautiful.

Body - Sweet landing, waxed bourbon and then sherry.  Oddly uncomplicated compared to the 15, but still destroys most 18 year olds.

Finish - Long but sour but with expensive waxed edges.  Bitterness again, and a little one dimensional in the icing sugar sweetness.

What’s not good about it - Long, bright icing sugar sweetness is a little dull compared to other expressions.  The nose is more restrained.  It’s not, in my opinion, as good as the 15.

What’s good about it - Lovely peat and sweet balance, intense sherry and oak sweetness.  A fabulous dram despite the competition from its siblings.

18 n - restrained but classier, more wax and lipstick, more strawberry.  b - more tropical at the front, bitterness at the back, more tobacco.  Comparing them side by side, the 18 is clearly superior.  Comparing them sequentially, I enjoyed the 15 more.  Weird that. 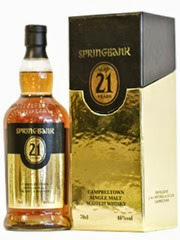 Nose - Intense fruitbomb nose and bubblegum, old-Tomatin like but lacking some of that three dimensionality.  Faint backing of oil and structure but it’s hidden a little more behind the lewd front notes and the Marlboro lights.  It’s still balanced but younger expressions had more impact with the integration between the masculine and feminine aspects.  On further investigation, this 21 is showing recesses of complexity and perfume.  Reluctant and a little shy, but has depth.

Body - An amazing, long, intense and complicated development.  From initial fruit explosion to dark, bitter, long and deep finale, this delivery can’t really be broken into body and finish.  Although maybe....

Finish - an unexpected sherbety and bright, citrusy finish arrives way after you would expect, with oil, wax and peat balancing everything out.  The intensity is there and bright and bold.

What’s not good about it - Doesn’t give up its treasures easily.  Compared to the rest of the range, very expensive (at release, now it’s sold out it’s way over the mark).