Wemyss is a bottler and blender I’ve been meaning to get to for some time so I was very excited to be chosen for their tweet tasting.  I was less excited to discover I was later booked into an un-get-outable work thing either side of the night, including dinner and drinks, and had to miss the tasting itself.  Steve was kind enough to let me keep the kit and I’ve only just got round to trying the stuff.  Here goes: 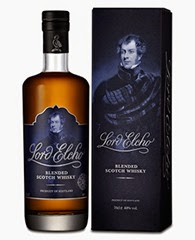 Nose - Light, sweet, appley, lightly waxed nose.  Good balance, perfume, and wood.  It’s very pleasant, balanced, a little floral with that cereal, deodorant edge I rather like.  There’s notes of cigar tobacco in there, and a little touch of drying peat, and toasted cashew nut.  It’s all rather pleasant but not particularly exciting or intense.  Fair enough given the price point.

Body - Cigar and sweet, some wood and a little meat, not very well integrated, ultimately not that good to drink, but quite interesting.

Finish - Quite long, a little angular with peat notes fighting with that floral wax - lack of integration again.

This is a cheap, competent blend.  It doesn’t do much wrong, except it’s not particularly fun to drink, which is a shame.  If you’re reading this and playing at this price point for a bottle, I would much rather buy the peat chimney 8 (below), push the boat out a fiver more and get a tweeddale, or play with the NAS single malts like the Tomatin Legacy.  Or just drink less and save up for a Yamazaki Distiller’s Reserve.  Tough market. 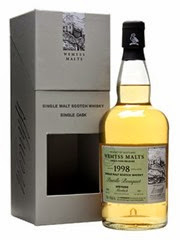 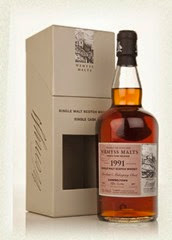 Body - Light raisin, curry like with cumin and turmeric, spikey tannins and chewed, old leather.  Rolling tobacco on the tongue.

Finish - Wood-sherry balanced, a little bitterness, but quite short.  Fresh and clean for such a dark, rich whisky.  Eventually the bitterness and peat notes start to dominate and fight.  It ends quite tannic, drying and meaty.  A weird ending to something so sensual at the start. 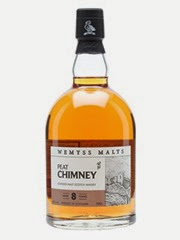 Finish - ...then some real side of the tongue toffee pennies, rich wood sweetness, and lingering toast and marmalade.  Actually it’s really deeply sweet, wooded and toffeed on the finish.  Quite long too.  Congratulations to Wemyss for producing a peated blended malt that actually outperforms on the finish versus the body.  Still, the balance throughout is excellent - an expertly blended whisky with real interest.