Following on from my previous post 4/6, some OBs, here’s a tiny fraction of the many and varied independent bottlings of Bruichladdich.  While the distillery is unusual in that it appears to create it’s own IBs as well as a core range, there’s still a thriving market in independently bottled single casks (or otherwise) out there to be explored.

Nose – Very similar to the Scottish Barley, but then less wood, more cereal sourness.  The citrus is still there,the toffee malt is still there.  The nose is less overtly challenging, but less interesting for it.  There’s some deodorant, and more orange juice than blood orange.  With water, brings out some more tropical notes of toffee banana and a hint of peat.

Body – Sour, spicy, very hot indeed.  Toffee and pretzel, an initial hit of mango and banana.  The longer you leave it the more tropical notes come through.

What's not good about it: A little unbalanced, not enough Bruichladdich character compared to the Scottish Barley, and too spicy.

What’s good about it: But water brings out its sweeter, fruitier side – the tropical notes and structured cereal is very good.

The fourth Bruichladdich release from the well regarded Elements of Islay range of IBs. 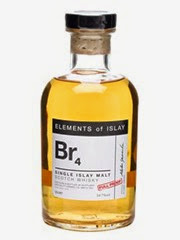 Nose – Warm furniture polish, some (men’s) perfume – a real Saturday night special.  The sweet toffee malt is ever present, fronted by the scent of a good night out.

Body – Lovely, smooth sweetness with a lot of chocolate and wood.  It’s the most classically sweet arrival so far, with a little red chilli backing it up.

Finish – Long, very bold and powerful, spicy but more wooded than chillies.  Balanced and a good changer throughout.  Lovely.

What's not good about it: Not much.  A bit obvious with the perfume perhaps but that’s still fun to nose and drink.

What’s good about it: A good, solid Bruichladdich nose.  Beautiful arrival, love the interplay between perfumed sweetness and spice.  Bought a bottle.

Nose - Ripe, but a bit thin.  A sweet malt, some ripe pears, quite a lot of cereal, pine shelving.  A little raw but if you persist, a floral, perfumed sweetness develops.

Body - Quite delicious, malty and balanced, biscuity arrival, with a little banana ice cream and then more cereal.

What's not good about it: Cereal and raw notes are way too high for a 19 year old.  A little one dimensional too I’m afraid.  It’s not really flawed, just not that good.

What’s good about it: Some toffee develops, and some good malt.  It is actually quite tasty and chocolatey if you dig and persist and I could drink quite a lot of this if required to, but I’m not playing in this league right now.

Body - Chocolate, toffee, some spice.  Quite sharp for it’s age but oddly compelling.

Finish - Fresh, quite hot, quite a lot of wood, medium length and lots of chocolate near the end.

What's not good about it: Quite zesty for a 20 year old although I am drawn to it like a good Thai curry.  It does present like a much younger whisky.

What’s good about it: Like the chocolate notes, like the zesty moreish nature of it overall; it has a lovely, clean but deep sweet toffee nose.  It’d have good balance if it were a younger whisky.  Even at this age, it’s still interesting and quite compelling.  I wouldn’t mind a bottle of this.

Nose - Bright, ripe pear.  A little sour malt and some wax, some fruit and nut bar.  Perhaps too bright and light, almost metallic.

Body - Intense, malty toffee sweetness initially, then the biscuity dark toast and a hint of sulphur.

Finish - Medium, quite well balanced but not so well integrated - the dark toasty sulphur and malt is tasty and does offset that sweetness but there’s a lack of midrange and it doesn’t quite hang together.

What's not good about it: Too bright and light, something not right in the integration, feels like the sherry ACEing has been successfully used to make up for a dry, lackluster 22 year old but hasn’t been left long enough to properly benefit.

What’s good about it: Good intensity on the nose initially but doesn’t reward further investigation.  The sherry and sulphur is very good here.

Bourbon barrel 638, 30/6/2004-21/8/2013, 273 bottles.  I’ve reviewed this before but that was just when it was opened, and it has opened up enormously since. Having personally dealt with most of this bottle over the last few months, I can honestly say it’s a really lovely whisky.

Body - Toffee sweet again and lightly peated, toasty and malty.  Bang of sulphur at the back of the throat (not sure where that comes from as there’s supposedly no sherry here) works very well.

Finish - Comes undone a little at the finish, with some wood bitterness encroaching, but eventually the deep Bruichladdich sweetness wins through.  At the end, hints of pineapple.

What's not good about it:  Perhaps a little sour and the bitterness in the end is a shame, but it all hangs together so well.

What’s good about it:  More youthful vitality, fantastic integration for the age, extremely interesting to drink and very delicious.