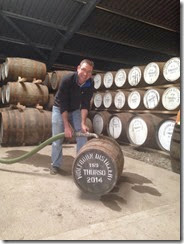 Wolfburn Distillery today achieved the production milestone of filling its one
thousandth cask. A total of 811 casks were filled in 2013; this week the 189th
cask of 2014 was filled, making a grand total of 1,000.

"It's a huge achievement," comments Shane Fraser, production manager. "We
reached the magic 1,000 number quicker than expected - and even better, we have done it without compromising on quality."

The spirit laid down in 2014 will only be bottled as whisky in 2017 - and even
then the vast majority of casks will be held back for longer maturation. "This year
we have laid down more spirit in large ex-sherry casks," explains Shane. "They
will produce really lovely whisky but it will benefit from longer aging, so we'll
keep most of it to mature for many more years."

Wolfburn's inaugural whisky is expected in the first quarter of 2016. It will be
made from spirit laid down during the early part of 2013. "There's still a long way
to go until we start bottling," says Shane, "but we're ahead of projections in almost
every aspect of the business and very much looking forward to being able to share
our whisky with the world."